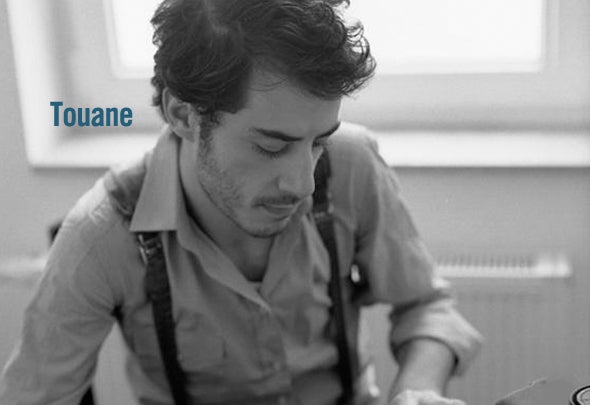 Touane is Marco Tonni, a Berlin based producer since 2004, Touane is known for his ecletcic approach to music, and his efforts to cross boundaries between dance rhythms and more deep and layered music. Born in 1979 in Rimini, a tourist-choked seaside in the north of Italy, at the age of 17 he began to experiment with music and recording, creating sounds that helped him to reconfigure the incomplete memories of his favourite childhood songs into a new and signature sound. He spent his university years in the more stimulating town of Bologna. Here, Marco started collaborating with other musicians with whom he achieved small but important successes in the city, focusing on DJing and performing live at the famous Link club as well as exchanging ideas and opinions about software, production techniques not to mention their love for music. During his final two years in Bologna, he worked to spread a fresh kind of do-it-yourself musical aesthetic for non-musicians. Marco and his colleagues organized a series of events and parties which culminated at the end of April 2004, in the Homework Festival, which showcased the panorama of the young and emerging computer artists and musicians in that isolated but open minded college town. As he continued building relationships and friendships with artists of the northern European minimal music scene, he finally decided to move to Berlin, Germany in 2004. , He also collaborates with Stewart Walker at Persona Records and with Stewart's help and guidance, he has managed to develop and distinguish his own sound. 2005 was the year of his debut 12” “Afasia”, with the release of his first singles which were charted by Djs such as Troy Pierce, Falko Brocksieper, Jeremy Caulfield and Steve Bug. He also released, “Awake,” who got him good attention from magazines and music lovers all over Europe. He started touring Europe, playing cities such as Madrid, Moscow, and Rome, while simultaneously refining his studio and his live show performance ceaselessly. If this first year of productions marked a strong but still discrete entrance into the european music scene, the year 2006 seen the definitive recognization of his talents: at first with his top-charting single Bassic , which got licensed for the Fabric Live Cd mixed by Tiefschwarz and for the U.S. magazine XLR8R Berlin Issue Compilation, then with more releases on Dumb-Unit, Trenton, Regular, and finally on Persona with two more singles. Spree Baptism and Prosa have been suggesting clearly the path he wanted to follow, taking his sound signature production techniques far from genre categorization and a step above the sometimes excessive monotony of certain minimal techno. 2007 was mostly touring for Marco, as he crossed the atlantic both sides bringing his unique sound to US, Canada and Japan, he can finally reckon to have played in most of best clubs of the western world. Sstill he kept producing side really active, releasing a new album and a couple of singles for his home label Persona, for which label he also took more responsibilities from the managing side, as well as releases and remixes for Trenton, Curle, Lan Muzic and Liebe*Detail. This big musical output granted him great press feedback, getting extended features, video interviews and a constantly increasing presence on several electronic music blogs and podcasts towards the globe. As of now, Marco is still deep in the studio collaborating with some other musician and alone to his advancement and to new music, following his ideal of spontaneity and unleashing his creativity in always new ways.