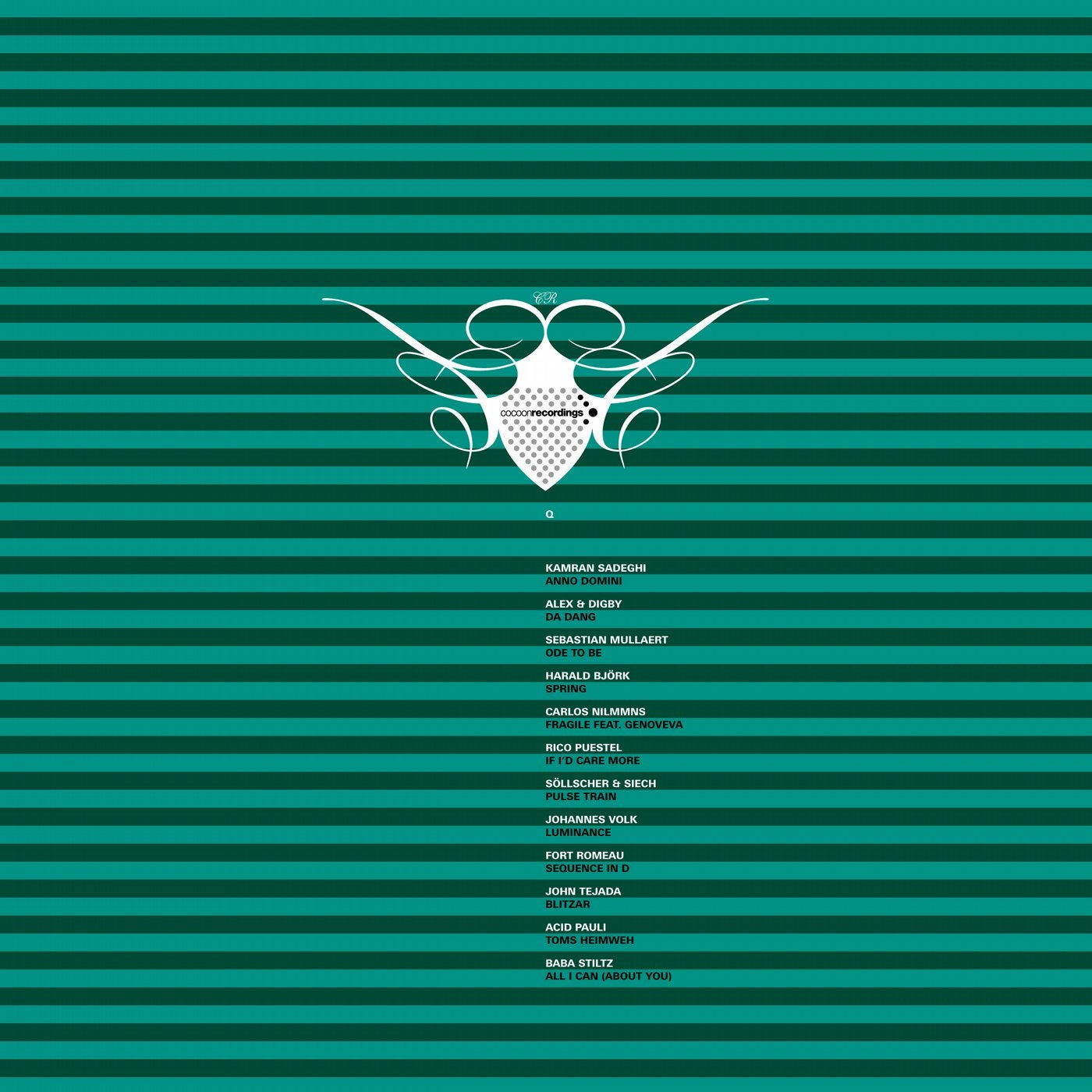 Cocoon Recordings presents Q - the new edition of one of the longest running techno compilationseries worldwide! We do not want to start again by mentioning how unbelievable it is that we havereached letter Q already ... and we do not even want to imagine how fast we will probably arrive atXYZ, if time continues to fly like this. The actual thrilling part of this compilation series is simply the factthat Techno seems to not grow any older in this form - isnt this amazing?Here, in the truest sense of the word, we have a compilation of timeless material before us. With abroad bandwidth ranging from futuristic-deconstructive compositions such as "Da Dang" by Alex &Digby and "Fragile" by Carlos Nilmmns or the many contributions to Q that fancy almost anachronisticacid and trance influences: Everything sounds fresh and forward thinking!The vocal parts and the arrangement of All I Can (About you)" by Baba Stiltz appear like electronicsinger songwriting. The musical approach of Baba Stiltz is slightly similar to big Pepe Bradock productions and their Dada aesthetic. In contrast to this, "Anno Domini" by Kamran Sadeghi followsthe sound approach of early Maurizio / Basic Channel records and reminds us that modern technodoes not always have to be impulsive and kicking, and certainly does not define itself over the mostextreme "drops" (sick!).Harmonies and melodies of all kinds and the almost dreamy and playful sound arrangements aresomething like the common element on Q. For example, Ode to Be" by Sebastian Mullaert works likea decent sunriser that marks the end of a long night. We especially dig the almost shamanicvocalsamples here! Harald Björk takes it a few steps further in the harmony corner. His song Spring"is on the edge to an ambient / chill out song and unfolds a a great hypnotic effect. "Toms Heimweh byAcid Pauli and the demanding "Sequence in D" by Fort Romeau follow into a similar direction, howeverboth pieces are build on slightly more solid beats despite their melodic basic mood.What brings us to the tracks of the middle section of Q - because there is a lot of material with evenmore power and floor potential waiting for us. Above all is "Blitzar" by US legend John Tejada.Metallically cool, but equally sexy and bass-heavy at the same time, Tejada throws crazy designedsounds on us - what an insane master piece! "Pulse Train" by Söllscher & Siech, on the other hand,follows a more traditional techno approach with a strong beat & bass foundation and cool acid linesthat slowly build up in interaction with a driving ride. The vapourspacy string sounds make the DetroitTechno reminiscence finally complete. All things acid is the way to go for Johannes Volk, too. His"Luminance" is a bit more consistent in an almost old-school acid manner and appears to besomething like the most clubby track of the album. "If I'd Care More" by Rico Puestel is perfectly set inthe tracklisting on position 6 as is turns out this one is something like the "all-embracing track" on Q:Puestel unites in his contribution the different approaches and lines of the other pieces and deliversthe secret title track of the compilation. Here you can find dry and kicking beats, dreamy melody parts,but also hypnotic basslines and lots of crazy sounds in the arrangement. Exactly like the overall vibe ofQ this one cant described as "futuristic" and certainly not "oldskool" - it is simply timeless! Puestelbrings the essence of Q to the point and this track alone makes us confident that there will an issue "R" following next year... es wird immer weiter gehen, Musik als Träger von Ideen (Kraftwerk).