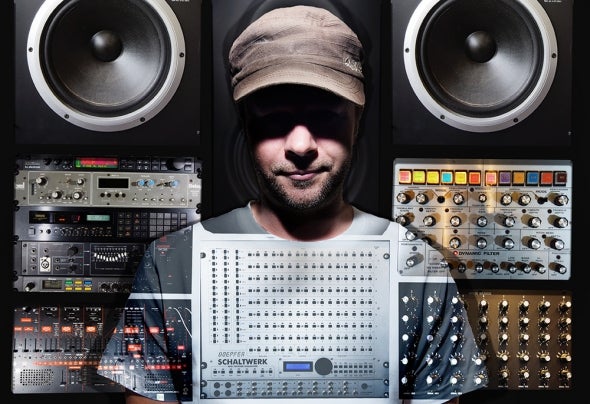 The Emperor Machine is Andy Meecham. New album 'Like A Machine' out on Southern Fried Records in 2014. Andy Meecham is a man of many musical incarnations and has been since the early 90s. Following on from projects like the now dormant Bizarre Inc and revived dub-disco duo Chicken Lips, it is as The Emperor Machine that he explores his most experimental sounds. To date there have been three full length albums on DC Recordings after the project was initially started with the idea of creating music using just one synth, the Roland SH-3a. The results lay out the Staffordshire man’s love of vintage synthesisers for all to see, and combine tough edged disco beats with more cerebral cosmic melodies into alluring soundscapes that bend your mind and drive your feet. As well as a slew of 12s and LPs, The Emperor Machine has also turned his hand to remixes of giants like Moby, Daft Punk and Royksopp, and has previously taken a live and inspiringly psychedelic incarnation of the project to clubs and festivals across the planet. Says the man himself: “The project started as an experiment and kind of went on from there. It’s a more electronic alias than my others, inspired by things like kraut and prog rock.” Spring 2013 brings with it the release of a new 12” ‘Like A Machine’ which is built on a thick, rasping arpeggio and is laced up with the sounds of flying spaceships, synth washes and twanging guitars. It’s bulky, ballsy disco that comes alive with a sensuous vocal and is just the beginning for the rejuvenated producer… Later this year, The Emperor Machine returns to the fold proper with a brand new album on Norman Cook’s Southern Fried imprint. Despite it being four years since the last, Space Beyond The Egg, Meecham admits little has changed except for the addition of a vocalist. “I prefer to make albums as The Emperor Machine. I like to go a bit weirder, which I think you can on an album. I’ve used my wife’s voice in the past but now I’ve hooked up with a vocalist for the new album. I use an iMac now - as well as hardware - which makes things easier than before when I was having to mix them live on an analogue desk.” Once the album is released in summer 2014, a whole new live show will be assembled and toured around the world so that, once again, The Emperor Machine can reign supreme over the most esoteric and psychedelic dancefloors.