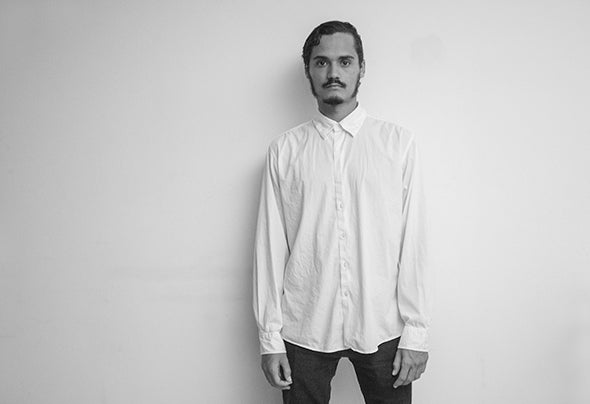 An indomitable musician and producer, Alejandro Molinari’s draws influences from conspiracy theories, neo-esotherics and supernatural arqueology. His musical references range from post-punk to old-school techno.The Venezuelan-born Alejandro Molinari describes his process of creation as “riding a beast to manipulate frequencies”. His tracks are polylingual, singing in English, French, Spanish and German, and even at times employing a bizarre dialect that amalgamates them all. Analogue synthesizers, guitar riffs and the use of the lost Solffegio scale supply his music with unique electro-magnetic frequencies.In June of 2016, Molinari released his first official EP “Break the Bricks”, with the Japanese label Blindetonation. The track Peso Muerto gained him wide aclaim and is an unmistakable influence of his time spent living in Mexico and his immersion in the techno scene with the likes of Daniel Maloso, Rebolledo and Thomass Jackson.This upcoming Spring, Alejandro Molinari will be releasing his latest EP, Sunrise Blow, with the British label Nein Records. The EP is complemented with remixes by Roe Deers and Alinka.He has also collaborated doing remixes for Emerald & Doreen, Logical and other labels.