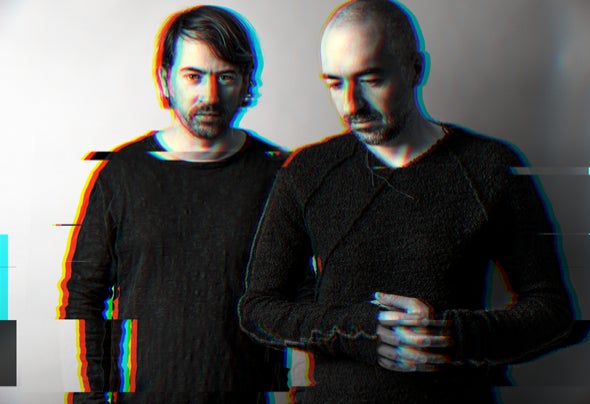 Marching Machines is a Begian duo with a musical history that spans over more than two decades. Their love for electronic machine manipulation is key and have their output on labels like Correspondant, Rotten City Files, Opilec-music, Why people dance, Nein and Wrong Era records. One operator in service is Dimitri Andreas, a producer whose chronicles go back to the early 2000’s, with a wide range of works that vary from left field electronica and Belgian pop, to tailormade music for contemporary ballet performances. He speaks Wooky fluently and he’s a master in soap carving. You’ll find his creations and time-lapse videos on social media. Being a nerd, he’s inscrutable. The rumor goes that he once sold a synth to fund a tree hugger workshop on the island state of Yap. The other operator is Ghent based Spacid, a well-known DJ/promoter who has been active in Belgium's underground scene for more than two decades. He is the former boss of Radius records and re-released Italo disco in the early millennium. Next to his love for music, Spacid loves green beans and koala bears. He's feeling judge-y when he finds the time to dust off his vinyl stock and he is an avid collector of in-flight sick bags. In 2014, he won the prestigious Tuvaluan Lacemaking championship in and is also an amateur surgeon. Isn't that awesome? Together they do their stubborn thing. In a strange and inspiring way, they complement each other in their quest for innovation. They’re exploring the boundaries of Electro, Dark disco, Italo and EBM, topped with a Belgian old skool New beat vibe. Welcome to the machine!