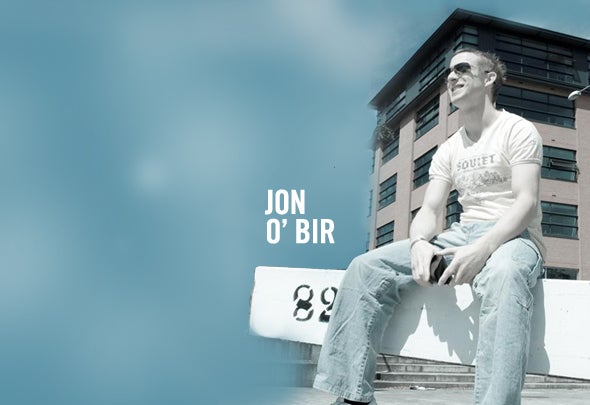 Jon O'Bir Biography http://www.jonobir.com | http://www.myspace.com/obir Jon's life changed back in September 2002 when he won a DJ competition for Passion and M8 magazine, beating 300 other aspiring DJ's. Godskitchen soon offered Jon a residency and the prospect of a fledging career as Britain's next DJ sensation. "This is how trance is meant to be: beautiful bosh that takes you to another place" Mixmag feature February 2003. Appearances on the Essential selection and Fergie's Radio 1 show as well as a trip to Holland for a guest mix on Armin van Buuren's popular' A State of Trance' show propelled his name to a wider audience. In 2005 Jon made an appearance on the world famous 'Essential Mix' and in 2006 Radio 1 offered Jon a slot on 'The Residency' alongside 6 other DJ's including Eddie Halliwell and Nic Fanciulli in which they presented 6 of their own shows, broadcast live on the U.K's most listened to radio station. He also became involved in Radio 1 events such as 'One Big Weekend' in Sunderland and Radio 1's '10 years in Ibiza' live from Space, Ibiza, this showcased Jon's talent to a huge audience. After the success of 'The Residency', Jon started his own monthly show 'Ways & Means' which continues to grow in popularity with listeners and with various worldwide radio stations airing the show on a regular basis. "I've been impressed with Jon's recent production work as Aira Force and his A&R work for conspiracy. The man is clearly on a mission to push his own unique trance sound. He's still young and has already established his name with the trance elite. He can only get bigger. Don't say I haven't told you so." Armin van Buuren says. During his residency at Godskitchen, Jon gained respect from DJ's and clubbers for his flawless warm up and energetic peak time sets. He showed how diverse his resident skills were by warming up for Sasha, Tiesto, Paul van Dyk and many more big name acts. He also kept the dance floor rocking, playing after these A-list DJ's. Playing at Air and other huge Godskitchen events, such as Global Gathering, other clubs and other big events soon filled up Jon's diary, these included Homelands, Gatecrasher, Slinky and international venues in U.S.A, Asia and Europe. Jon still plays regular Godskitchen events despite the residency ending in 2006 and as each month progresses more and more venues show their interests in booking this skilled artist. In terms of his own productions, Jon's first few projects were collaborations alongside Gareth Emery and Airwave. 'Escapade', 'Bouncebackability' and 'No Way Back', produced with Gareth Emery, gained plenty of support from top DJ's and fans alike. The single 'Promise I Made' produced with Airwave, one of Jon's favourite artists, was also a well supported release. With the knowledge gained from the collaborations, Jon hit the studio to create his first solo production, 'Effectual' and soon to follow was 'Ascendancy'. He also worked on a number of remixes, including the massive 'Jose Amnesia – Louder' released on Armin van Buuren's label, Armada. As well as being a DJ & Producer, Jon is also a label manager of Conspiracy Recordings, created in the summer of 2005 by Jon and Rob Stevenson which continues to release high quality tracks produced by new and established artists, gaining support from all the big players in the scene. 2008 and onwards looks set to get better and better for Jon O'Bir. Paul van Dyk has signed Jon's first artist album, titled 'From Within' to his huge record label Vandit and it will see a worldwide release in the summer of 2008. With the rising popularity of his productions, radio show and record label and still under 25, the future looks very bright for Jon O'Bir.