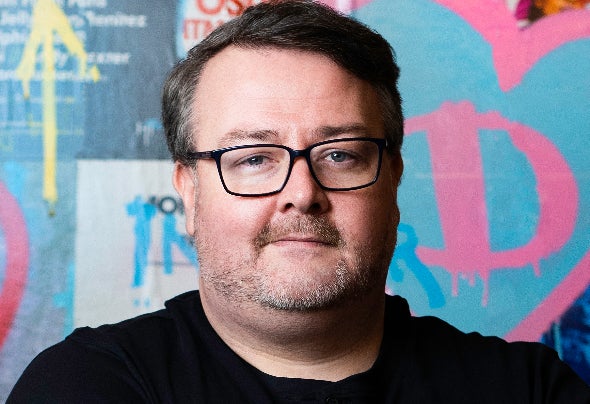 Wez Saunders is the co-owner and CEO of Defected Records, the New Era Music Company. Joining the company as Singles Manager in 2014 Wez’s position swiftly evolved, stepping from Label Manager to Head of Marketing in quick succession. Before taking co-ownership of the business in 2022, he spent six years as Managing Director overseeing all aspects of the company, including recordings, promotions, events, and business affairs. With entrepreneurial drive and a keen appetite for dance music since his teens, Wez started out as a DJ touring across the UK, while working as a writer with now-established artists on productions and remixes. With a young family to provide for Wez then moved away from music to join the finance sector, working at Deutsche Bank for 12 years where he was promoted to Vice President, on his way to becoming the youngest Director in Deutsche Bank’s operations history. Tragically in 2008, Wez’s younger brother Jamie was diagnosed with leukaemia and died just 23 days later, turning his world upside down. The grief gave him a new outlook on life, and he felt compelled to return to music, setting up a label suite of five imprints in 2010. Building out his experience into all aspects of the music business, Wez also consulted on or ran promotions and label services for artists such as Marshall Jefferson, Darren Emerson and Tough Love, as well as setting up other initiatives including a community development arm (which integrated into charity organisation APE Media, who continued to work with the likes of J Hus &amp; Not3s). After a chance encounter with founder Simon Dunmore, Wez’s career at Defected began in 2014. He has been responsible for signing some of the imprint’s biggest modern hits, including CamelPhat &amp; Elderbrook’s multi- platinum-selling ‘Cola’, Lee Walker vs DJ Deeon featuring Katy B &amp; MNEK ‘Freak Like Me’, Endor’s ‘Pump It Up’ and John Summit ‘Deep End’. As Managing Director Wez leveraged these impactful records to pivot Defected’s recordings business towards streaming, achieving his goal for streaming revenue to bank roll and increase the global reach of the company. He also implemented a fully worldwide events strategy, featuring two recurring Ibiza seasons, touring across four continents as well as the growth of the Defected Croatia festival and the birth of Defected London FSTVL and Defected Malta.  Pairing his ambitious empire-building spirit with a distinctly nurturing character, Wez successfully navigated Defected and its staff through the COVID-19 pandemic, an otherwise potentially treacherous period for the industry and its people. Defected inducted three new labels to the group during that time, also launching the Defected Virtual Festival series which accumulated 50 million views and raised $1.2 million for the WHO’s COVID-19 solidarity fund. Philanthropy is a consistent thread through Wez’s career, recently being appointed to the board for the Elton John AIDS Foundation, as well as setting up a partnership with Bridges For Music (Defected funds 25% of their student cohort), also raising over £100,000 for MIND and £265,000 for children’s leukaemia charities over the years. Wez is also on the committee for The Music Industry Trusts Award supporting the BRIT Trust and Nordoff Robbins. In recent years Wez has spearheaded Defected’s inaugural Wellbeing Committee to address cultural shifts within the business, setting goals to improve staff welfare and finding new ways to look after its people.  In 2022 Wez facilitated the acquisition of Defected Records Ltd and all subsidiaries as part of Optimum Music Limited, as co-owner and CEO. He continues to work alongside Simon Dunmore in his revised role as A&amp;R Director, sharing the same ambitions for the company as they have since 2014.