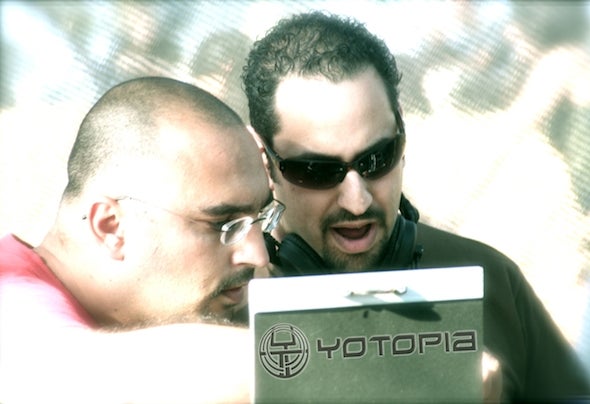 Yotopia is the electronic musical project by Yonatan Rimon & Tomer Dayan from Israel. Yonatan & Tomer started playing with computers and musical softwares at the end of the 90's, but their professional musical carrier started at the year 2003. After busy 2 years of performances and many releases at major labels around the world they released their debut album "Point Blank" at Flow Records from Portugal which became hugh success, and supported by many djs and fans over the glob. Since than, they performed all over the world and took place in big festivals and events such as Boom (Portugal) / Tshitraka & Indian spirit (Germany) / Soulclips (Turkey) / Symbiosis (SF-USA) / Aurora (Greece) / e-concert (Brazil) / Universo Parallelo (Brazil) / Radiance (Mexico) & many others, playing their own music live performance and uplifting dj sets.Among the big success of their first album, Yotopia delivered many tracks on compilations and also compiled 2 successful compilations for flow records known by the names "Globalize 1" & "Globalize 2", both were supported and played by top djs and hit the charts at 1st places!At the year 2009, Yotopia released their 2nd album at one of the leading labels of the progressive scene, Iboga rec. In this album they matured their sound and blurred the lines between techno, progressive and trance. The result is stunning! A super high quality and well- crafted album, an essential and Unique DJ package which smashed lots of big dance floors and clubs. Nowadays, besides the prog. Trance project "Yotopia", the due is running another project called "Dayan & John" dedicat ed t o more t echno and progressive house productions & Dj Sets.