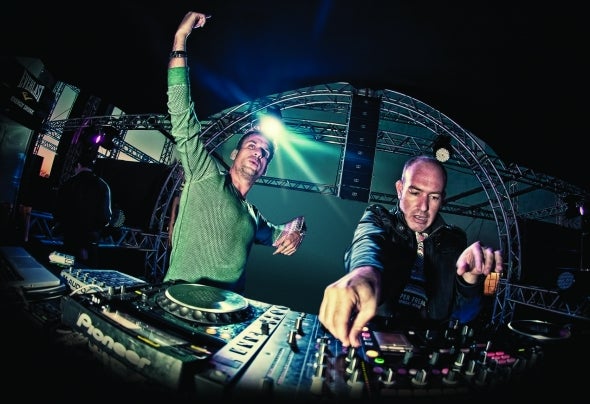 X-noiZ e are Barak Argaman & Nadav Bonen from Tel-Aviv, Israel.Always aiming high, T he trance tracks that they produce since the first album and before of it - have become massive dance floor anthems as they are very communicative but always maintain that undeniable trance edge there for remain most respected in the underground psychedelic scene as well .Continuously creating music non stop – X-noiZe music have the flavor of serious, powerful, full-on/ psychedelic trance with techno and progressive elements.X-noiZe debut album 'Mental notes' (2005) is considered one of the freshet prospects of modern psy trance. Their unique sound production became a guideline for the new Psy-generation, crossing over rumbling baselines, euphoric melodies and club elements.Their second album "Revolver" (2007) put them as leaders and headliners in the world ,and their tracks were played in every party all around the globe.In 2008 X-noiZe released the EP "part of the plan" which immediately lunch a world tour starting in japan trough USA , Mexico , Brazil and Europe.The next EP Transparent (2009) contain once more a massive impact tracks that cross-over very well for prog- trance dj’s and artists as well .X-noiZe new album “ClockwiZe” that was out in end of November 2010 . the album made a big noise and lunch world tour 2011 while some of the tracks in that mile stone album is being played till these days .by the end of 2011 they release the massive RMX-noiZe ep @ hommega rec.in 2012 X-noiZe were busy on doing their progressive act MAJOR7 - that become top prog act in psytrance all around the world.2013 x-noiZe released "On-Demand" EP at Nutek Rec , and changed their style for more progressive elements inside their music .the new X-noiZe sound that is a perfect crossover from fullon /psytrance to progressive psytrance is now played all over the globe and become a huge success.