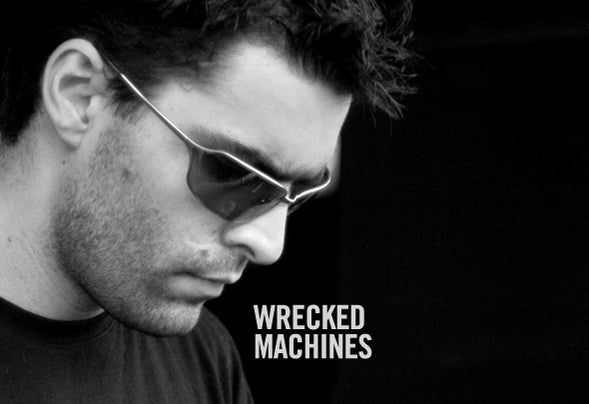 Top 5 in the world and the biggest phenomenon in brazilian trance of all times. Broke barriers to become one of the main revelations in the scene for the last few years and above that to become the first brazilian to gain a place in the international market. Hits like "Trancespotting" and "Round n' Round" are both well known around the world, and the recent release of his second album for Spun Records and Solstice Music are markers for his maturity and assuring his place in the top of the trance in the world. Gabe started in the emusic scene in 2000, when he worked at Galeria Ouro Fino, at the time, the temple of emusic in Brazil, where he got in contact with the famous djs of that time. At this point, Gabe started producing in his Playstation and in a few months he was releasing his first track for Magma Records (Italy). Then he was invited to join Etnicanet and started to create his live act, named Wrecked Machines, wich after would be known in Japan, Germany, South Afrika, Israel, Portugal and Mexico. In April 2003, he produced "Worried World 12"", his first vinyl album, then in june of the same year, he released "blink", his first full album, both for Etnicanet (Ibiza) and Solstice Music (Japan). This international releases, caused great impact and took him to large events around the globe. He became very popular in Japan after his presentation at the "Countdown On New Year's Eve 2003" and "Archaic Revival", in 2004. At this point he was already been known as one of the greatest trance upcoming revelations in the world. Thanks to his productions, at the end of 2003, he signed up with Spun Records. Now Wrecked Machines was been elected by the media as the best Live Act and Best trance producer in Brazil. During this time, Gabe made partnerships with the biggest names in world trance, susch as: GMS, Domestic, Pixel, Psysex, Simon Posford, Panic, Antidote, Shanti, Dimitri Nakov, Étnica, Atomic Pulse, Intelabeam, Joti Sidhu an dj Mack. And now he joined GMS in a new project named Growling Machines, which is getting recognition in the international scene. In February 2005, Gabe release his second album, "Second Thought" for Spun Records (Spain – Ibiza), Solstice Music (Japan) and Carambola Records (Brazil). Assurring one more time his value in the music production. He just finished "Wreck Chord", his first compilation (double album), relesased in 2006 for Spun Records (Spain). An exclusive album containing great names such as: Wrecked Machines, GMS, Pixel, Domestic, Growling Machines, Beckers, X-Noize, Nick and Perplex. The other disc has Spun Records release mixed by Gabe.