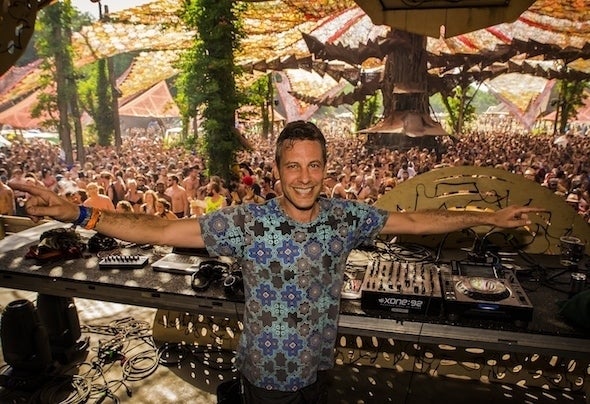 UK based DJ and producer Lucas O'Brien has been rounding up dancefloors and rocking them in the right direction since he started playing acid house andtechno in the early nineties at renowned London clubs such as The End, Heaven, Club UK and Fabric.His trance-infused psychedelic techno music was found to crossover with the sounds being played in Goa in the early 90s and it was this that led him to an opportunity to play at some of the early, now legendary, TIP parties.Today, with two highly acclaimed No.1 selling albums "God Save The Machine" and "Tales Of Heads”, his most recent chart topping compilation (Avant Garden) and many more collaborative projects in the pipeline (including with Eat Static, Hallucinogen, Ajja, Martian Arts, Earthling, Outsiders, Tristan, Dickster, Sonic Species and Laughing Buddha), Lucas is best known as a leading psytrance DJ representing Raja Ram's label TIP Records globally with his unique driving UK psychedelic sound.Lucas has performed in over 40 different countries and shows no signs of slowing with his touring in the last year stretching as far afield as Europe, Russia, US, South America, South Africa, Middle East, Asia and Australia. The same can be said for his studio productions with his latest solo psytrance album ready to be released on TIP in Nov 2018, new tracks forthcoming from Sybarite and some techno projects in the pipeline too (following the success of his collaboration with Nanoplex, released on their album “Digitechture” on Iboga Records).He also has an exciting new project with Celli Earthling under the name MandelBros and they already have a new live-set ready to unleash. Known for setting dance floors alight with his diverse quality sounds and masterful mixing, he has become a firm favourite at prominent clubs and festivals worldwide.