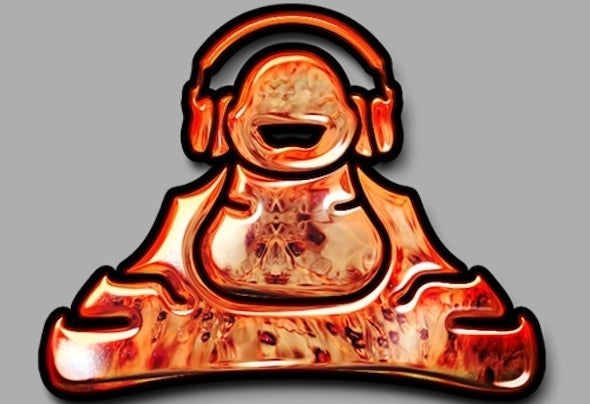 Following the release of his debut solo album ‘Sacred Technology’ in 2010, Jez ‘Laughing Buddha’ has been going from strength to strength. His new collaboration album 'Illusions and Collusions' out in June 2014 will only cement his position as an irreplaceable addition to any dance-floor or lineup. Gigs including appearances at Ozora, Boom, Sunburn, Atmosphere, Utopia, Glade, Maitreya, Psychedelic Circus, Indian Spirit, Indigo, Universo Paralello, Earthdance and multiple tours of India, Japan, Australia, Israel, Brazil, and many other countries have made 100% sure that Laughing Buddha is now a household name on the worldwide Trance scene! With a career spanning nearly 20 years, from the early days of the Goa Trance scene and his involvement as co-producer on the seminal album ‘Cosmology’ on Transient Records as one half of Cosmosis, Laughing Buddha developed his solo career with releases on Flying Rhino, T.I.P. Records, Dragonfly (as Drum Druids) and other labels before moving on to the green and exciting pastures of the Nano Records team. Jez “Buddha” is an experienced Live Act and DJ and anyone who has seen him perform will confirm that he lives up to the name of the Laughing Buddha! He brings a unique ego-free energy to every party he plays at, truly coming to life and invigorating the crowd with his driving high tech masterpieces and unique stage presence. His recent collaborations include new tracks and remix work with Tristan as Fearsome Engine, Avalon, Electric Universe, Eat Static, Space Tribe and many more. Every track is sounding better than the last with Jez, whose hard work over the last few years has really been attracting some serious attention from Psy lovers across the planet. Coming soon to a party near you!