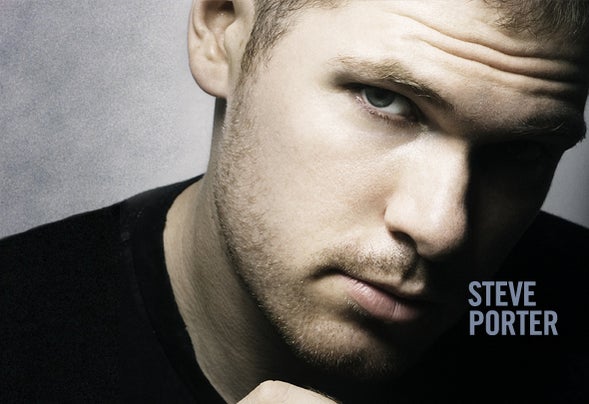 Once in a blue moon there comes along a prodigy that is noticed by the big guns and whose talent catapults them onto the world stage. Something of a child prodigy from a famous scientist father, Steves first love was discovering electronic sounds at 16 years old. From Boston to New York, Steve Porter has evolved from record store clerk, mobile DJ to New England rave DJ to landing on the roster at one of the most prestigious booking agencies in the world. Steve Porter was discovered by Chris Fortier when Chris heard a CDR of his productions in 1999. Chris quickly brought him into the FADE Records fold. Soon thereafter, Steve was signed as the youngest member to join The Collective Agency; home to Sasha, U.N.K.L.E., and Lee Burridge. He began touring across the U.S., Canada, South America, Australia, Asia and Europe and has played alongside Sasha on the Airdrawndagger & Involver North American tours, Sander Kleinenberg on the Essential Mix Tour and also headlining a hectic schedule of national and international DJ dates. Over the last six years, Steve has amassed a wide portfolio of over 70 singles and 28 remixes under his name and the many aliases (Agent 001, HDF & Bons) used to suit the mood of the song. His myriad of tracks have been dominating dancefloors globally with the versatility of Porterhouse finding its way into the record boxes of everyone from Sasha, Lee Burridge, Derrick Carter, Carl Cox, Sander Kleinenberg, Mark Farina and Paul van Dyk. Steve's debut artist album 'Homegrown' released in 2005 on Fade Records is an amalgam of his various unique styles and melodic nuances. The expertly mixed album brings together 14 original tracks. Some of which have already garnered wide attention with inclusion of the tracks on numerous high-profile dance music labels & compilations including; 'Vodka Cranberries' on hot new label Nu Republic, 'Definite Form' on Sander Kleinenbergs Little Mountain Records and included on his recent Everybody CD for Renaissance, and most recently, the track 'Swanky' has been included on über-cool Felix da Housecat's upcoming Playboy: The Mansion compilation. The essence of Porterhouse brings the energetic action to the dancefloor where the warm, funky basslines and cool percussion melt away any chin stroking pretensions and the resonating guitar & piano hooks lure you into an eternal groove. Make no mistake, Porterhouse is party house.