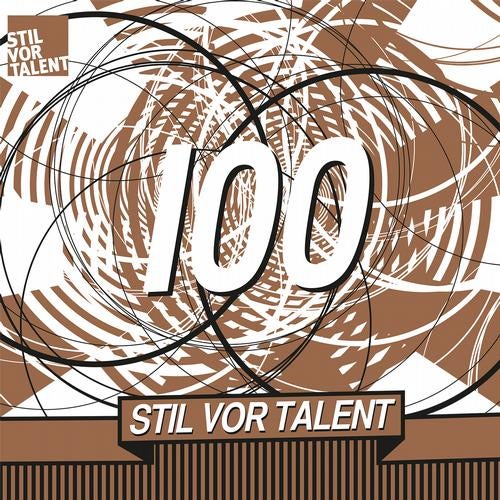 Exclusive
Who would have thought that, when Oliver Koletzki released his 'Blackout' EP as SVT001 almost eight years ago, Stil vor Talent would reach the catalogue number 100? With our 100th release, we can look back on lots of fantastic music, music by artists who have become part of a close-knit family of friends. On the surprising and unexpected, as well as a signature sound in constant development. On the love given and care taken, by illustrators, graphic designers and everyone involved. Most of all, however, we look back on moments of pure bliss, spent on the dance floor with you, where the music comes into its own and works its magic. Here, on Oliver Koletzki Presents Stil vor Talent 100, a compilation of 22 exclusive, previously unreleased tracks, we celebrate those who have made the label what it is today, our core group of artists. Kellerkind and Murat Kilic provide two nu disco tracks that both re-contextualize classic strings and harmonies in a contemporary framework, with the former showcasing his trademark sound and a catchy vocal sample, while the latter pairs filter house elements with a soulful, sunny guitar. Björn Störig collaborates with all-rounder Meggy to create a piano-driven vocal house track with a classic feel. Equally classy and understated, Sascha Braemer shines on both of his contributions. While Need Someone featuring Stevo is laidback, subtle and utterly beautiful, Niconé & Sascha Braemers Wish U will cause a stir on the dance-floor: bright synths, cheerful vocals and a 90s rave piano, what more does one want? Speaking of the 90s, Animal Trainers Mental has a comparably old-school vibe and will make for an epic set closer. Similarly, the thunderstorm break of Oliver Koletzkis remake of Erich Lesovskys One Word will leave you breathless. While HVOB and Jan Blomqvist both represent their signature styles melodic, driving, intelligent some of our artists are aiming for a darker sound than usual. Dan Caster proves how versatile he is with You and I, a bass-driven monster. Ryan Dupree targets the peak-time with menacing synths and acidic bass-lines, while Niko Schwind presents us with a sweaty beast in the form of Lazy People. Similar yet less surprising, Dapayk Solo, AKA AKA feat. Thalstroem and Channel X provide us with energetic tracks that reference house and techno in equal measures, while appearing futuristic and otherworldly. Staying true to our philosophy, we also warmly welcome some new faces to the family. The Berlin-based duo of Marlon Hoffstadt & HRRSN kick off the compilation with the positively poppy Once Again, on which HRRSNs vocals make for an early highlight. Severin Borer relies on a contemporary, uplifting bounce and a naughty bit of sampling, while Katjuschas vox works perfectly within Jakob Fabers clever arrangement on How to Describe. Boy Next Door might not literally be a newcomer, but his Heart Cut certainly does sounds incredibly fresh. Slightly deeper, both Oliver Schories Hidden Champagne and Pete Oaks Come In featuring Natalie Conway are crafted for the depth of night by combining dominant bass-lines with melancholic timbres. Last but not least and heavily anticipated, 17-year-old Jonas Manteys Sie ist Schön exemplifies an impressive command over melody and arrangement emotionally charged, tearjerkingly beautiful. Thus, we look brightly towards the future, to new adventures to come. Adventures, which we cannot wait to embark on together with you the fans and supporters who are equally important, close to our hearts, and who have made it all worthwhile. Without you, all of this wouldn't be possible. Thank you.