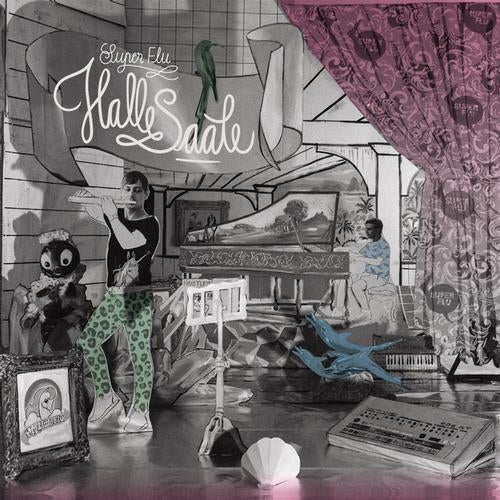 Feliks peels off the skintight dolphin costume, looks deep into Mathias' eyes and says: "Halle Saale." The birth of the second album of these two guys from Halle is just as beautiful as the tracks themselves. After "Heimatmelodien-, intended almost exclusively for the dance floors of this and other parallel worlds, accelerated the pulses of the 4/4 Electronic Music fans, the pair are now venturing on deeper and more picturesque paths with their new album - and sometimes even disappear into the forest to pick some Pop. The needle captures the first mountains and valleys and can hardly wait to pass them on. A soundscape of unknown proportions begins to emerge. Opa Herbert breathes the first vocals into the vastness of space; we embark on an endless journey, accompanied by bells and fresh whole milk. What do we learn from this trip? Cryptic titles which, after a while, become crystal clear to us and a cover that could not be more disturbing. A setting in which there are no rules. Neither time nor space is respected here and viewing habits are trampled on. If we follow the path that leads inside this setting, we will find the two at their favorite pastime and will never be able to tear our eyes away from them again. The laboratory, full of boiling and bubbling vials: Such was the nursery of the two astronauts Feliks and Mathias before they quit their jobs as air traffic controllers in order to amaze us time and again with their skills as a DJ act. For almost 30 years they have been one of the top acts on the electronic club scene and never grow tired of reinventing themselves and trying new things. Halle, also known as the diva in gray, was the model for the second album and reveals herself in all her facets. We are enchanted by her siren-like voice, carried by Lilou and Ponybande. She shows us her dirty thoughts and sends us back to the department of dairy products with a headbutt. Handel grabs the last yogurt before the raptor learns to solve the Rubik's cube and finishes us all off in Doom 2. Whatever! It seems that, after "Heimatmelodien-, the guys felt like creating a DJ album that does not aspire to be and isn't a DJ album. The tracks are arranged in much too complex and ingenious a manner, the bass lines are too delicate, and the synth sounds too captivating for this album simply to be played. Thus, this is a DJ album to really listen to. We are torn abruptly from this deceptive depth and the grungy snare drum urges a return to the dance floor, which we will not quickly leave again. In the dark black light we meet the guys from Monkey Safari and Andhim, who devoted all their energy to this album. "Handel was a great inspiration for me!- Sir Richard David James is reported to have said. This was the inspiration that spawned an album for the city at the very heart of central Germany. "Every day we experience how our home changes and is filled with new things and simply spews up the old," explains Mathias, as he sprawls on his freshly slain Falkor. Limitation, together with full use of all available options, is the principle on which the album is based and the central theme of the listed songs. Expectations are rarely met and some will be disappointed. But Pittiplatsch will continue to play his 808 and sell the Hustler to innocent dolphins. Perhaps things have remained as they always were after all?! Little mole does not interject in any case. Unfortunately or perhaps fortunately, this is not the case. Each track takes us on an unknown journey, from which we cannot be sure of returning. IDDQD drills cryptically into your auditory nerve after it has filled up with yogurt. Growing up seems to be a completely foreign concept to the two part-time lumberjacks. Charming 2 in a world in which there are electronic music schools and adolescent ears have to endure analog synthesizer sounds via 2.5 mm headphones. The album demands more attention and critical listening! The thoughts of the two creators about the album: "If you ask strangers what they think of Halle, the answer is always the same: ugly and dirty,- says Mathias sitting on his green velour stool. "But isn't that exactly what people want in their dreary everyday lives?- counters Feliks, drinking his glass of champagne. "We journeyed through our city and tried to capture it, to channel its sound, and to press the most interesting facets on vinyl for our listeners.- "Oh, my Halle has grown so dear to me ... I really am very fond of it!- "But-, interjects Feliks, "isn't it a little too expensive for us?- "Absolutely not! It has made us what we are today.- The curtain falls. What remains is a cocktail of the most wonderful emotions and a tear rolls down his cheek just to reflect in the light of the evening sun and disappear on the shoulders of the dolphin T-shirt.