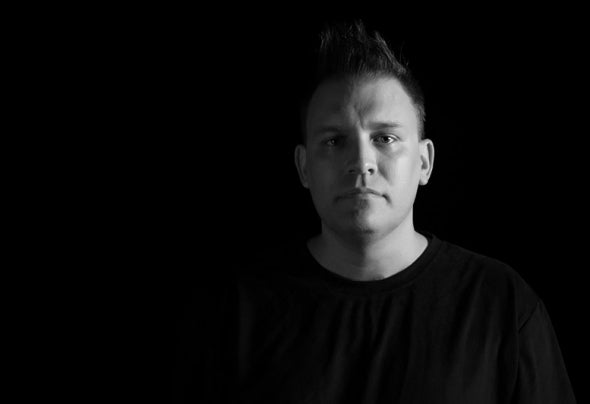 In the early 90s, Aaron relocated from Memphis to Dallas where he stumbled upon a Saturday night EDM unlike any other: Edgeclub 94 with Jeff K and DJ Merritt. It was there that he found himself drawn to an electronic drum; similar to hip hop beats he loved but with an exciting new pace. Aaron would search tirelessly for info on Dallas’s underground scene, where he became witness to local, regional, national and world talent generating astounding atmospheres with hypnotic beats.Aaron won his first dance music vinyl single in 1997 from Edgeclub called Da Funk by Daft Punk. A year later, he bought his first Technics 1200 turntable from DJ Merritt and his first mixer from JT Donaldson at Spin Masters. It was a while before he was finally able to purchase his second Technics 1200 -- the missing piece to his dream. Then there were the countless trips to Bills Records and Tapes, Oaklawn Records, Core records, ATPT and Tower Records. Aaron’s bedroom became his creative sanctuary where he devoted countless hours each day to his craft.In early 2000s, he got a major break playing for a DJ contest at Homebar for the newly formed Big Pimp Productions and forged a friendship with the owner, Jared Romero – a friendship that has lasted over a decade and been a major contributing factor to his career. His journey later found him playing events in Dallas, Austin, Shreveport and Miami as well as throwing his own club events and even owning a record store at one point.