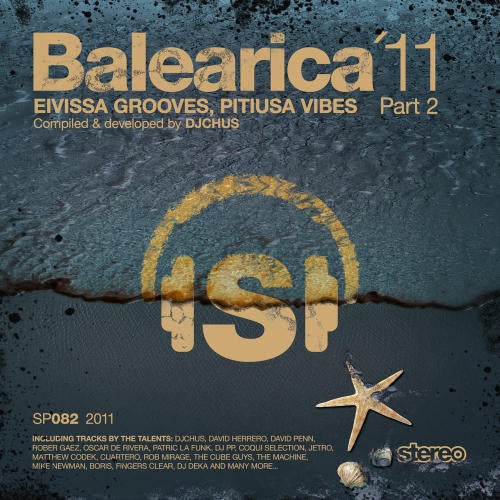 Balearica '11 Part 2, Eivissa Grooves, Pitiusa Vibes, Compiled & Developed by DJ Chus, www.stereo-productions.com, www.djchus.com We are in summer, everybody is enjoying the vacations and the best way to perk ourselves up is a second dose of Balearica. The summer album from DJ Chus that has become a common release will have a second and awesome part, with tunes that will make you move with the rhythm and essence of Ibiza. Ibiza Grooves, Pitiusa Vibes is the emblem of this powerful compilation from Stereo Productions, a homage to house music an to the summer that every year is worldwide spotted in the white island of Ibiza.In this second part, which grows in number of tracks up to 30, we can find the artists from the spanish famous label and his innumerable talents distributed worldwide. It begins with DJ Chus in 'We Got To' together with his great New York friend Rob Mirage, they have already show us that this cooperation is explosive. The masters from Urbana Recordings, David Penn and Rober Gaez presents together with the fantastic deejay Oscar de Rivera, Sambarah, their new House hit. One of the most active producers in this summer couldnt be missed, David Herrero with DJ Chus in 'Everyday of my life' no words!. The Cube Guys recently incorporated into the label, that surprise everyone with La Banda and his enormous success that is again included with a new mix along with his new and last work 'Torero'.There's also a new track of Britishers The Machine (James Doman + Pete Gooding) together with Jonathan Cowan called Musicasa that will be the next Stereo release. Patrick M, Matthew Codek with a double entry DJ PP, the maestro DJ Boris, Coqui Selection, Cuartero, Glender, an endless list of awesome producers.But Baleárica '11 part 2 not only have the new original from all of these talents, also has fantastic remixes of tracks that are or were house hits from DJ Chus like 'Sound of the Drums' with Abel Ramos, the classic 'Burnin' Paris' with David Penn, 'La Samba' with Mikel Curcio and 'La Medicina Sagrada' from the Portuguese producers Pete Tha Zouk, Just to mention some of them.Balearica is full up of 'Bombasricas' as Luis Puig says, owner and ambassador of the Space Miami, that will be dropped everywhere causing a musical explosion of rhythm, joy and emotions as Stereo Productions and DJ Chus usually do.