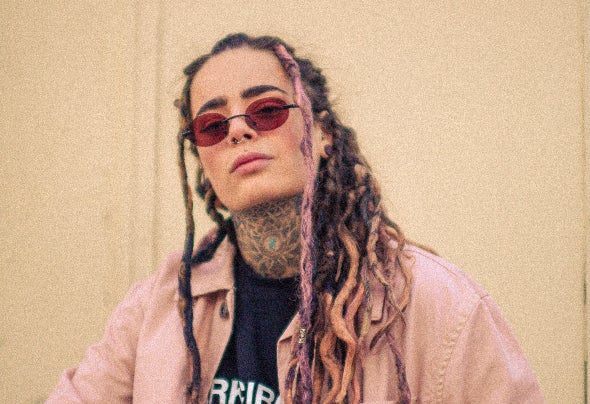 Refusing to conform to the norm and never following the formulas that work for others, there were always glimpses from the early stages of her career that Fleur Shore is very much an artist leading from the front. The depth and breadth of her musical knowledge was already years ahead of her junior. Fleur acquired a record collection from an early age that exuded the magic of the late ‘80s and ‘90s, taking inspiration from the obscure sounds and period of experimentation that are present in both her sets and productions. From Slick Rick to Bill Withers and Salt-N-Pepa to Lauryn Hill - Fleur’s sources of inspiration knows no boundaries. Despite only producing for just over 2 years, Fleur’s productions ooze infectious basslines, captivating vocals and an investment of passion to resurrect the sounds from yesteryear with her own unique twist. Her debut EP on Outbound Records reached #2 in Beatport's top 100, and she followed this up with top 10's on Lowerhand Records and Power To The People. Fleur's music has also received support from the likes of Darius Syrossian, Rich NxT, James Dexter, BBC Radio 1’s Jaguar & Kiss FM's Ben Malone. Her technical ability was clear to be seen early on, and after catching the eye of legendary Birmingham promoter Tom Shorterz back in 2017 with her approach to playing differently to most - her upward trajectory to stardom has shown no signs of slowing down. She quickly secured residencies cutting her teeth as a warm up DJ at legendary UK clubbing institutions Rainbow, Lab11 as well as leaving her mark with residencies in Liverpool, Nottingham and lit up the main stages at MADE Festival and Hungary’s Budafest. Her Undergrowth brand is very much a reflection of her as an individual, as the ethos of Undergrowth is to connect people on an intimate level and draft in artists that she believes are on the verge of breaking through. She was the first promoter outside of London to book Rossi, as well as Toman & DJOKO, and the brand will be joining her as her rise through the ranks continues at a lightning pace.