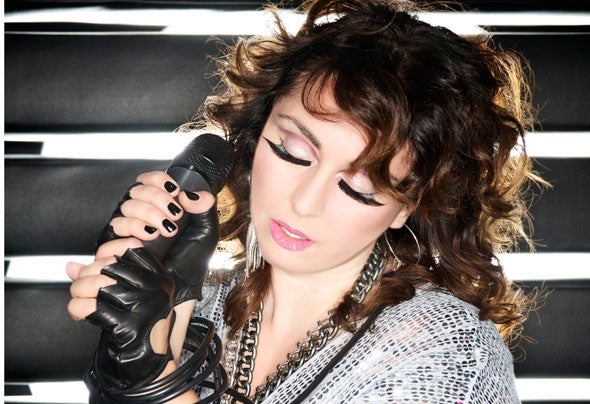 Selda received first public attention with amazingly 15 years during her school time: she was head and voice of the Rock-Pop-band „Girl Power“ at a time when the feministic program of the Spice Girls was not even invented. With 4 girls on the stage, „Girl Power“ showed an energetic mixture combining the girls’ female self-confidence with powerful Rock and soulful influences. Seldas voice was the trademark of the band and –with a unique motto and the sensational live show- a guarantee for amazing success: „Girl Power“ played lots of concerts during school time of the girls, found itself in the Pop-culture of the nineties during Selda’s job training and appeared in the welknown German Pop-magazine „Bravo Girl!“, the daily press and at several concerts and small festivals. Apart from the „Girl Power“-success, Selda managed to find her own way into the music industry with widening her musical abilities and lending her voice to several Dance-, Electro-, Trance- and House-productions. The list of projects, labels or producers who used her voice in the last years is like the Who is Who of the contemporary Dance- and club-scene: Bellini, Loona, Fragma, Paffendorf, Project Aura (soundtrack for the motion picture "Pura Vida Ibiza"), Angels (act in Japan), Ramon Zenker, Gottfried Engels, Torsten Stenzel, Gang Go Records, Tiger Records, Upright Songs, No Respect Records, Yawa Recordings and many, many more… in 2008, her first solo single "100% Pure Love" entered all important dance charts, the official german sale charts and hit the Beatport overall top 10 ! In addition to her studio work, Selda enchanted the audience by singing on many live-events and club tours like Club Velfarre (Tokyo), Camel Privat Club Tour, Tribehouse (Neuss), Apollo (Cologne), Casino (Essen), NOH-Club Party (Capitol Theater, Düsseldorf), Maspalomas Gay Pride (Grand Canaria), shows in Brazil and Russia and Live Jam Sessions in several german House clubs.