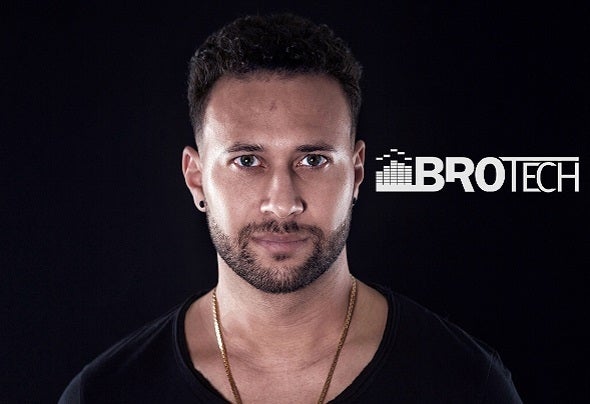 Blessed with a determined mind, adventurous heart and a knack for diversity, Pascal Vaudran has spent his entire life exploring the boundaries of all things music. And though it has taken him quite an evolution to find his real sense of belonging, it’s the journey that’s brought the German producer/DJ with French Caribbean roots to where he is today. Under his Brotech moniker, you’ll find him flying the tech-house flag – ever in search of that unique connection with the crowd. Fully dedicated to producing high quality house and techno, there’s nothing that can get him off course.Hooked on music since childhood, it wasn’t until the age of 15 that Pascal truly acted upon the thing he loved most. With the strong need to leave his own mark, he teamed up with 4 friends and started making hip hop beats – adding the final touch to the work of rappers. Though it taught him the basics of producing, Pascal felt that something was missing. That missing piece fell right into place when, aged 21, he visited his first house music event. It was love at first sight, with the scene’s atmosphere, the never-ending beat and a crowd that seemed to be breathing, living and loving the music. The foundations to Brotech were made.And so, he started DJ’ing under the Brotech alias. Hooked on electronic dance music - techno and house to be precise - Pascal took a deep dive into everything involved with the scene, from performing DJ sets and spending long, lonely hours in the studio perfecting his sound, up to the organization of their own events. In 2010, he even founded Syncope Recordz, his very own label. His success brought him as far as St. Petersburg, Ibiza, London and Zürich, as well as all across Germany, sharing the stage with names like Oliver Koletzki, Aka Aka, Tomcraft, Benny Benassi and many more. Getting the confirmation he was doing the right thing behind the decks, made Pascal all the more persistent to please the crowd, and introduce them to his own music.