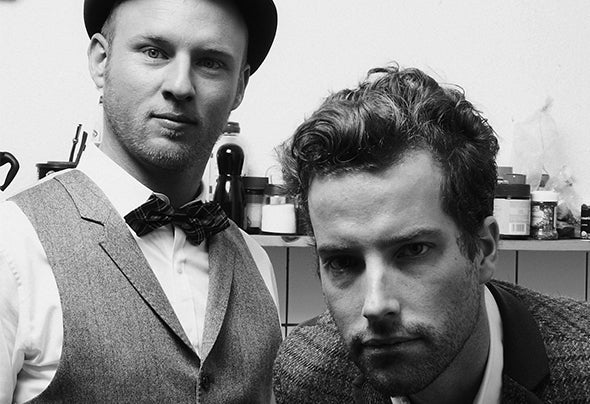 Since 2005, the djs/producers Yannick Labbé and Daniel Becker team up as Trickski and tour the world with an original, raw, soulful and musical sound. Their first Releases fill the DJ bags of acclaimed artists like Carl Craig, Gilles Peterson, DJ Hell or Peter Kruder, and thus kickstarted their musical career. Trickskis‘ unique mixture of playful amateur- jazzyness combined with their willful interpretation of electronic music makes many of the House/Techno/NuJazz/HipHop, etc.-dogmas look very pale in comparison. In order to give a home to their own definition of clubmusic, the guys founded their “Members of the Trick“, a sublabel of Berlin-based label Sonar Kollektiv.Artists like Solomun, Skwerl or FBI got a temporary home on MOT T. In mid 2008, Sonar Kollektiv slows down, and with it „Members of the Trick“. Frustrated with this abrupt ending Trickski do... nothing, except djing a lot. Their dancefloor-mixture of slow house, disco, soul and a bit of techno takes them around almost the whole globe. And this gives them inspiration. An inspiration that Trickski didn‘t just get in the penumbrous same-same of the clubs of this world, but also in the exhausted unreality of the streets on the days after playing. Since then, their sound has solidified towards a slowed- down suspense funk with lots of dirt in between kick and snare. New cooperations with labels like DIYnamic, Stilove4music, Future Classic and Delusions of Grandeur led them towards a new home: Suol from Berlin, where they released their first album. A boring proverb says: Travel broadens the mind. In this case, it shaped a sound.