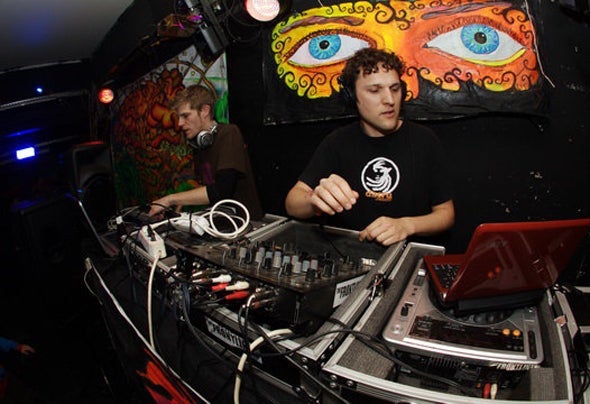 Aquila are Jonas & Thomas, born and raised in the small town of Waarschoot in Belgium. Due to sharing interests they soon found each other and in 2001 they set up the ‘Mental Gymnastics’ organisation. Organising numerous psychedelic parties in Belgium enabled them to work their way into the Belgian psytrance scene. Their most infamous realisations include a legendary Astral Projection party.In the meantime Jonas (DJ Bonas) was testing out his mixing skills and the two of them got interested in the production side of the music. Eager to learn more about these possibilities they took part in an electronic music production course organised by the SAE institute in Rotterdam, Holland. Many hours of home production and the acquiring of the right hard- and software followed.Early 2006 they met with the Dacru guys when they organised the Orientation Vol.1 release party together. The attention was startled for their music aswell, leading to their participation in the next releases of the Orientation series. After which they joined the Dacru Records label. Following many releases with Dacru and various labels, they released their debut full album ‘Gain Control’ in April of 2009. The album quickly lead to bookings in Japan, Russia and Fusion festival in Germany, while many other countries around Europe had already been visited. Their powerful sound will move dancefloors for many years to come.