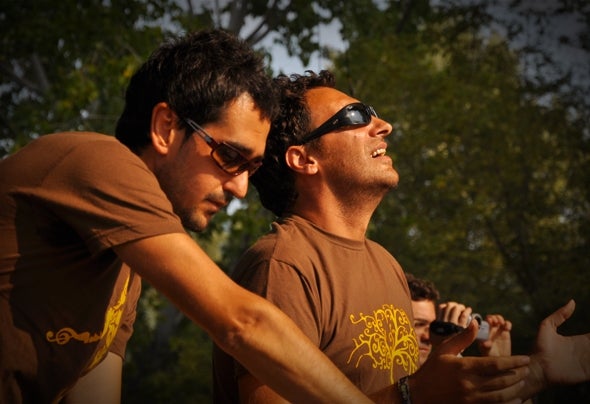 Kostas Daikos and Vangelis Alexandris are the individuals behind the Greek project E-Mov. Kostas became interested in electronic music production during his student years which he spent mostly in the UK. With the experience he already had from many years of musical studies and as a performing guitar player in various bands he started composing various styles from lounge to drum'n'bass, over ambient to psychedelic. Vangelis, a wel known actor in Greece, spent many years djing in various events in Athens and performing in rock and ethnic bands either as vocalist or percussionist. It was in 2003 when they decided to team up, creating a blend of psychedelic and progressive music, largely influenced by ethnic and tribal elements. Guitars, male and female vocals and percussions were ingeniously incorporated. In 2009 they released their debut album at EQNation Records, leading to a fair amount of gigs all over Greece. In 2013 they are taking another step up the ladder and joined Belgian label Dacru Records. Their second full album 'The Journey of Pan', released in October 2013 is bound to win them some international recognition.