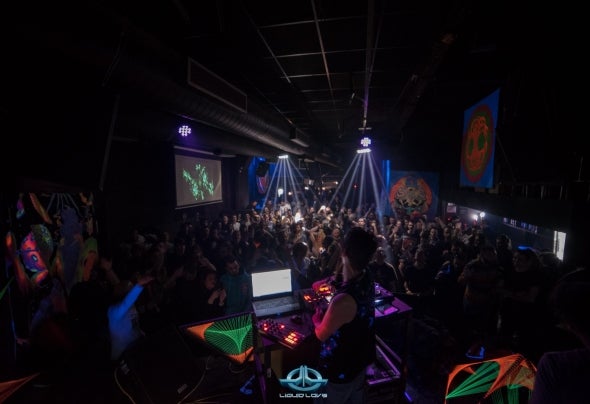 Astro-D is a pioneer of the local electronic music scene in Greece and an old- school raver, who got his start DJing in Athens in the early 90's, spinning techno and breaks in several famous clubs. In March 2013 he released his first EP Separate Reality on Ovnimoon Records, reaching #17 on Beaport’s top 100 Psytrance chart. August 2013 his second EP Forestphonic and single Step Beyond received support from well-known UK DJ Lisa Lashes included in her top 10 Beatport charts. His release on Pharmacy Music was supported By Paul Van Dyk and Christopher Lawrence in August 2014. His first #1 hit came the next year with his remix of a classic trance track on Andy Ling’s Fixation (Hooj Choons) that also reached #55 in the UK Singles Chart in 2000, released by Lost Language (X-Hooj Choons). This massive track reached #1 on Trance and Psytrance genres charts of Beatport. His remix of the top hit Errorhead by Hux Flux (Spiral Trax) was featured as #1 at Beatport’s “Must hear Psytrance”. Also his remix with Chris Oblivion of The Overlords Sundown went to #1 at Juno’s Top 100 Psytrance for 3 weeks straight.In his nonstop touring and local gigs in Greece, Astro-D has had the distinct honor to have played alongside top Psy acts Laughing Buddha, Max Etnica, Hux Flux, Spirit Architect, DJ Shane Gobi, Tristan, Talamasca, M-Theory and many others. Another one remix for lost language was the epic “Into The Dawn” by Accadia that was included in the top 20 for 2016 at Trance Magazine and vandsunete.wordpress.com. Worth mentioning are the officially supported and highly acclaimed releases of remixes that were created under his fingertips for artists like Astral Projection,Etnica, Shakta, Cosmosis, Overlords, Manmademan, Ubar Tmar, Prana, Braincell, Hux Flux, Logic Bomb and many others.