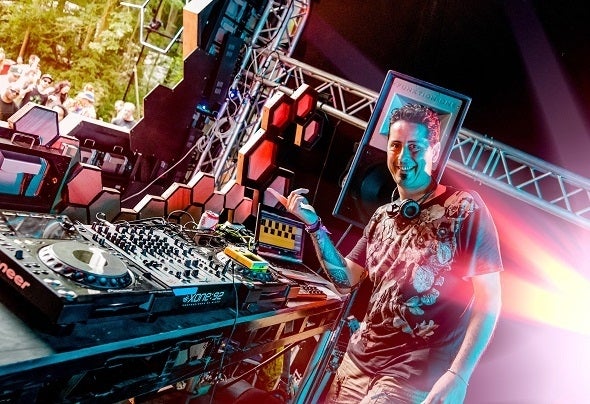 M-THEORY's sound features a distinctive and fat kick&bass with tight rhythms and quirky loops delivering a unique psychedelic groove to the dance-floor.M-THEORY has produced a full studio album and a number of EPs, remixes and tracks on labels such as BMSS, Alchemy, Free-Spirit, Antu, Blacklite, Neurobiotic, Profound and more. He has played at some of the leading festivals around the world like Boom, Ozora, Universo Paralello, Antaris, Fusion, Glade, The Experience, Sonica, Indian Spirit and Aeon Gathering, as well as in club nights across Europe and at London squat parties.Marcello started djing as soon as he arrived in England from Italy at the end of the Nineties. He became an event promoter and was one of the founders of the legendary ‘Fairy Tales’ parties in London. CIMI, his first project as a producer, was born in 2003 and was inspired by early progressive and full-on psytrance.After a few releases, Marcello teamed up with his former partner Rob Nichols and started to work on M-THEORY. Together they gravitated towards a faster psychedelic sound. The CIMI project was put on hold while M-THEORY were touring and producing their first full-on psytrance album ‘Branes’, released by Alchemy Records in 2009.Marcello went solo as M-THEORY at the beginning of 2011. During this transition he also resumed his work on CIMI and was signed to UK label Furthur Progressions, which released ‘White World Bridger’, his progressive debut album, in 2013.M-THEORY has been steadily producing and releasing music since. He has worked with prominent names, including Zen Mechanics, Sonic Species, Pixel, Rinkadink, Hypnocoustics, Burn In Noise and Earthling, and remixed tracks by the likes of Cosmosis, Avalon, Gaudi and ManMadeMan. He has regular studio collaborations with talented artists and dedicates any spare time to honing his mastering skills.