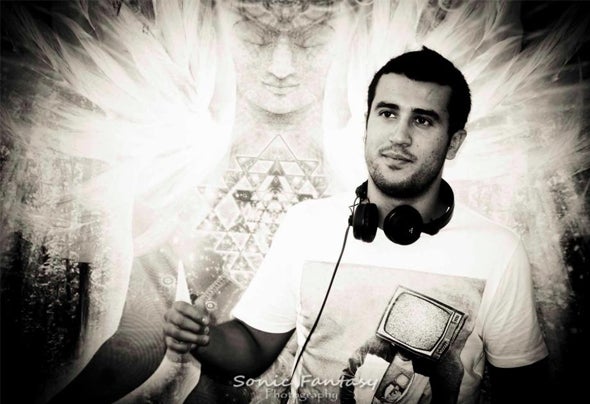 It all started in 2006, when his first track was released with the Belgian label “Dacru Records” in the compilation "Orientation Vol. 2", not long after that, in 2007 he was invited to play one of his first live sets in Rio De Janeiro at one of the biggest and most important parties in Brazil (XXXPerience), where he played for more than 15,000 people and shared the stage with leading trance acts.In 2008 he compiled Mushy Records' VA Wet and Wild, which was an instant sellout out on saikosounds.com andpsyshop.com, while also being one of the top ten downloads on Beatport.com. In 2009 he released his debut album 'Angels Calling' which also sold out atsaikosounds.com and psyshop.com, as well as topping number one onsaikosounds.com top ten chart for 5 consecutive days. Since then he has been busy working on new tracks, releasing music and playing at all sorts of parties, from small gatherings to big festivals while also working on his side progressive project (Unseen Dimensions, signed to Spin Twist Records). He has already played in the USA, Brazil, Mexico, Denmark and Australia and has also released several tracks on various compilations with labels all around the globe. At the moment he is working on his second studio album as well as building a new label (Airglow Records) from which you can expect many great things.