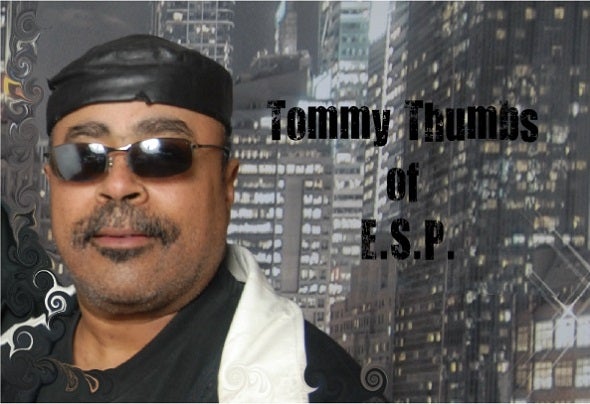 Starting out as a D.J. soundsystem and crew, it wasn't long before founding member Tommy Thumbs put his energy into making records instead of just spinning them. E.S.P. was the result. With childhood friend Daniel Ellington, they went on to release two of House Musics Classic singles with "Let's Move", and what some consider the true House Music Anthem, "It's You" which still sends Clubs into a frenzy when played to this day. After the height of the House Music Craze, Tommy went in pursuit of more main stream musical endeavors, as had many others that gave birth to this new genre of music, and in the early 90's contributed his talent to the background arrangements on the remix of "Ring My Bell" by D.J. Jazzy Jeff & The Fresh Prince, produced by Mr. Lee, for which he was awarded his 1st Gold Sales Award Plaque. As he has worked to rebuild the brand and the sound that he is known for, the last few years have been interesting and have included remixes on Alexander O'neals "Saturday Love" that made it into the Top 10 U.K. Charts, to remixes of the classic Joe Smooth Single "Promised Land". 2013 should be as interesting with projects scheduled for release including a Remix for DeepQuest “My Love”, Dawn Souluvn Williams “THANKFUL”, Co-Producer on Vicky Martins’ “I’LL BE FINE”, and a killer Club TranceFormation Mix for fellow up & coming Chicago Alternative Rock group St8 of Grace. Also, a Mix Tape CD featuring Classic Remakes, Remixes, and Re-Works of the Classic E.S.P. Releases.Also a non exclusive artist and remixer at Kingdom Digital Music Group.At the end of the day, this underground producer has stayed true to his roots and maintains he is still only just getting started. Although he has been involved with many Hip-Hop projects as well as Alternative Rock, Tommy insists that his heart is still with the House Music that the world has come to know and love.