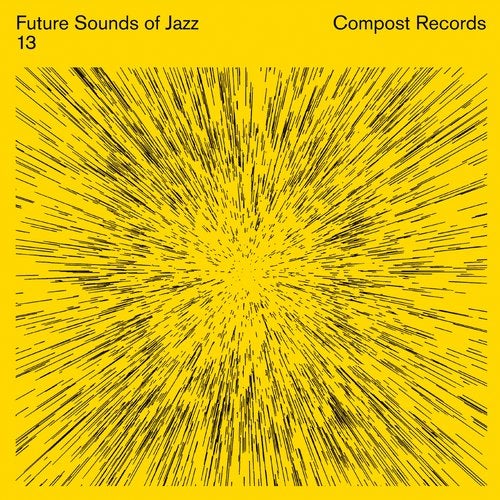 As usual FSOJ is compiled by Compost head honcho Michael Reinboth with a solid sense of leftfield tracks, punchy floorfillers, ghostly, cinematic, balearic, frazzled, bitter-sweet or mind-shaking hybrid tunes.Several magazines voted FSOJ as the one of the best compilation series of all time. With this series starting 1995 the term Future Jazz became a genre landmark.

FSOJ 13 including some exclusives, sought-after tracks and previously unreleased tracks. Some highlights are: First of all the Van Hai track in a Ripperton remix is a perfect opener into a tranquil music venture. A sheer bliss tune. Montezumas Rache Wu Du Wu, which was only released on vinyl before - still difficult to find the original 12 - is a freaky outstanding funk hybrid. Karim Sahraoui with a punchy Detroit-ish track, picked up from Derrick Mays Transmat label - is currently in the works with a follow up 12" later in 2017 on Compost. Acid Pauli delivers a brand new dubby balearic remix, which he recently did for Matanza, a live band from Chile. Peter Kruder came up with something special exclusive, a warm breath in the open air tune, which drives listeners into a chilled wormhole. Beside new names, bigger names like Axel Boman, Tony Allen with a Ricardo Villalobos & Max Loderbauer remix, youll find more lefties tracks from respected labels like Studio Barnhus, Innervisions, Lovemonk, Transmat, Mule, Tru Thoughts, Rebirth, Ninja Tune and m.o. next to other exclusive deliveries by Manuel Tur, Marsmobil, coupled up with semi exclusives: the first time on vinyl or digital.

The 14th chapter is near. The time is right.