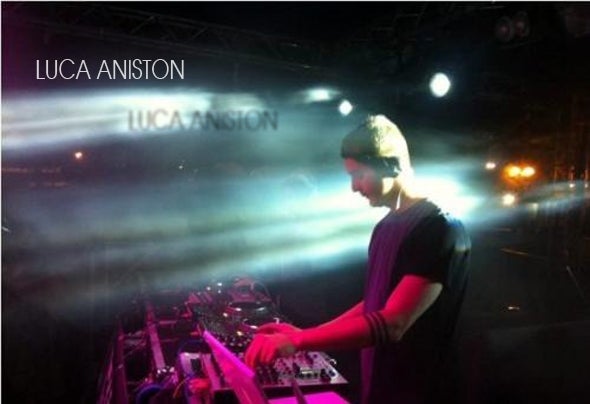 Luca Aniston, grown up in a small town in the south of Italy, starts his musical education studying piano at the age of 8, that has been crucial for his future career.His approach to electronic music comes shortly after, with the purchase of his first keyboard, that allows him to express for the first time his creative skills, inspired by artists like Daft Punk, Depeche Mode, Planet Funk.At the age of 18, when House Music rocks the scene, he buys his first console and he takes his first steps into the world of Djing in some clubs the Siena.His passion moves into the music production in 2009, with the release of his early records, including "Weltraum" and "Krissss", which represent his entry into the world of electronic composition.The first compilation arrives thanks to Stefano Noferini (Deeperfect Records), who selects "Utopian" for "Club Edition Ibiza Session 2010", putting together Luca’s works to those of Dj like Wally Lopez, Koen Groeneveld and the same Noferini.In the same year, the project Traum Tik starts, a group composed by Luca Aniston and Joseph Mirabelli, with whom Luca reaches the top of the Beatport chart within the Minimal genre, with the albums "Vision Trip" and "Itager", the latter remixed by Hollen, Raffaele Attanasio, Gianni Pellecchia, Marco Piedimonte, Shadow Sync, J & S Project and Dj Only.The year 2010 is significant for the release of "David Me" which will be remixed by six artists such as Hollen,Angy Kore, Lea Dobricic, J & S Project, Mirabelli and Marco Piedimonte, record appreciated by Marco Carola and Rino Cerrone.The following year sees the collaboration with Anthony Mea and the release of their first album Deep House "Day by Day".In parallel with his career of producer, Luca continues to work as a Dj in clubs like the “Ciclope”, where he has been Dj resident for 4 years, the “Dolce Vita” in the Salerno area, the “Velvet” in Naples, the “Côstes” in Florence , the “Hotel Me” in Barcelona.His sound style has changed over time, seeing the transition from House Music to Minimal, from Techno, to Deep, until the creation of a fascinating synthesis of these genres. The sound that inspires Luca during his sessions is highly emotional, with dark tones from the Berlin influence and it is derived from a strong passion for artists such as Guy Gerber, Mathew Johnson and Deetron. Finally in 2012 Luca’s first vinyl comes up with Blooming Soul Records: "Looking to the Sky EP", remixed by famed Dj Ernesto Ferreyra (Cadenza Records), reaching the top of the world charts on Decks.de.Created in the memory of his mother, the vinyl has a high symbolic value for Luca and it represents the result of his entire musical training, since the studies of piano, as well as being the greatest satisfaction in his career as a producer.He is currently working on two other projects for the Iside Music, with the participation of the extraordinary voice of the gospel singer and Dj Mandel Turner and his colleague and friend Anthony Mea. Artist Bio