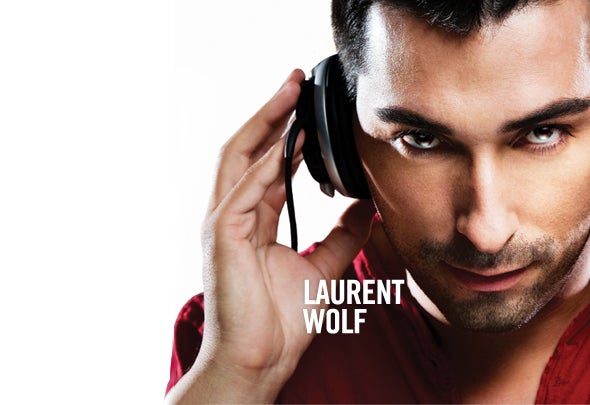 Beat, sound, nightclubbing, this is Laurent Wolf's universe. Laurent Wolf soaks in this holy night-trilogy since his debuts, as for 12 years already, he forged his vinyls platinums in his Mantes La Jolie's kid's room. A whole life dedicated to the boom boom beat, the dance beat, electro music and 125 BPMs's nights. While making his first sets in a disco of the Parisian suburb, Laurent is "tracked down" by the manager of the Queen, who proposes him a weekly disco night in this mythical night club of the Champs Elysees ("a paradise for the DJs, especially at that time. We removed handcuffs and we just had fun. It was a brilliant school"). Electro's nights, foam's nights... From 1992 and during 10 years, Laurent plays at the Queen till three nights a week. The Queen is for Laurent a real stepladder for a discographique career.First of all, these are the remixes which are of a redoubtable efficiency who will forge Laurent Wolf's image as a fickle, dynamic DJ who listens and take care of his fans. After several years to remix for the others, it is the click in his mind : Laurent wants to produce music under his name. " The difficulty with the remix, it that we are obliged to make it from a song which already exists and it is a constraint because we cannot be creative. " In 1995, "House Train", number 1 of the clubs, is the first evidence of Laurent's talent for house music production which is often tinged with an avant-gardist électro sound. But Laurent Wolf's Big Bang will be "Saxo", dancefloor hit all over the world and which will be, with "Calinda", the champagn of his first album, "Sunshine Paradise", (double CD) which imposes Laurent Wolf's style : a rhythmic music, with worked drums, powerful basses and nervous percussions. Funny anecdote: "It is not neither in Tokyo nor in New York that Laurent felt for the first time the impact of "Sax" on clubbers, but in... Caen (small city in France's country"), remembers its label manager Christian Lester," The public cracked on it. We looked each other with Laurent in the dj's cabin... We knew." "Even now I test my instrumental sounds in clubs, especially when the titles are not ended, to see if that pleases to the people. When it works, as with "Saxo" or "Calinda ", it's the fire on the dancefloor while nobody knows it. Then, you know that it's good" adds Laurent. Even radios, nevertheless unwilling in électro music, plays Laurent Wolf, who becomes a rising value of the french scene. He sells 200.000 maxis vinyls in 50 countries. We can find "Saxo" and "Calinda" on hundreds of compilations worldwide.In parallel, Laurent strengthens his discographiques structures : after the creation of the label DARKNESS in 2002, AFRODYNAMIC and RITMODYNAMIC follows. For every album, Laurent reinvests in new machines just to change his way to work and to create new sounds. His albums are entirely composed from A to Z, rhythmic, basses and vox. In 2004, the compilations POSITIV ENERGY and AFRODYNAMIC are both successful. Laurent's reputation continues to climb probably because he does not want to play to the game of the star system... Hard worker, Wolf installs his studio at home to be always ready to record, while continuing to cross the night world, making stopover in Taiwan in a club of 3000 persons, mixing and playing for New Year's Day in Chile for 15.000 clubbers , in Colombia on a beach in front of 25,000 persons, in Mexico City, in Moscow and at The Pacha Club in Barcelona (Spain) "I already took the plane twenty hours to go and twenty hours return to play a set of three hours", remembers Laurent. In 2006, it's time to continue more an more , always farther, always higher." I began to compose a new album in September 2005. We played CALINDA so much and it was really necessary to follow up. All the titles were recorded in my studio." The result? "Hollyworld" An ambitious, rich a rare eclecticism album, integrating as well the surprising "Quiet time" as uptempos hits "Come One", "Fire", "Hight Up", curiosities, as this original "Arigato" in Japanese accents. "Hollyworld" predicts a radiant and international career in a near future. Fan of SEAL and old school new wave (New Order, Depeche Mode), Laurent Wolf is with no doubt an inescapable music maker of the club's scene and its last bomb "Another brick" proves once again that it has the talent to go somewhere else... from the middle of the night to the light of the success. Without compromise, in sharpness and rhythm, Laurent Wolf takes place on the international dance music world.