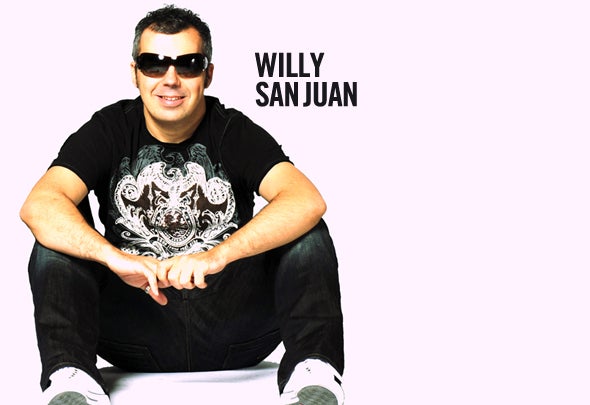 Willy Sanjuan is a deejay, producer and remixer based in Barcelona. With nearly 20 years of professional experience, he has represented Spain in over 32 countries. As owner of MOLACACHO RECORDS and an international traveling deejay, Willy has released songs under a breadth of labels, including BEDROCK, FLUENTIAL & SOUTHEAST in the UK, JUICY MUSIC, SFP, CATCH 22 RECORDINGS, NYMPHO SOUNDZ, NINECHANNEL & PARADAX RECORDS in the US; CHICAYORK, GOOD TIME & ROYAL DRUMS in France; and HOUSEPARK, HOUSEWORKS and MOLACACHO & VENDETTA in Spain. His hard work in the music industry puts him among the most respected DJs in Spain today. Willy Sanjuan has played as a DJ in top cities like San Francisco, Los Angeles, Miami, Madrid, Barcelona, London, Dubai and Ibiza (Privilege, Amnesia & Space), and is frequently touring countries worldwide, from Spain, Monaco, Switzerland, Germany and Italy, to Barbados and Canada. During his former residency at the infamous MILENIO CLUB in Montevideo, Uruguay, he performed special marathon sets of more than 14 hours, and gained popularity in surrounding Ecuador, Guatemala, El Salvador, Costa Rica, Peru, Colombia, Chile, Venezuela and Panama from his frequent visits to Latin America. Willy worked as one of the producers behind the mass hit GROOVE IS IN THE AIR, which was released under the TIJUANA moniker on John Digweed´s BEDROCK Records UK, and described as a progressive house classic by Hernan Cattaneo after selling more than 25.000 records across the globe. His other works as a producer include remixes from a multitude of renowned artists like THICK DICK a.k.a. E-Smoove (Welcome to the Jungle), MOCHICO (Eddie Amador), TUESDAYS CHILD a.k.a. ROB RHYTHM MASTERS, Bondservants, DJ Disciple and Robbie Rivera among others. As founder of the Molacacho Records label, Willy releases work of artists around the world in addition to his own tracks. The sensational hit PUSH MY BASS exploded onto the Central American dance radio scene. Produced by WILLY SANJUAN and housemaster EDDIE AMADOR, this outstanding track features vocals by British-based CLARA DA COSTA. With more than 9 weeks at number 1 on BEAT 100.9 FM Radio, PUSH MY BASS became one of the strongest hits of the year in Mexico and paved the way for a number of successful performances by Willy. Partnering with another producer from South America, Willy Sanjuan took one step further into the world of electronic music to form PUNCH EXCITERS. Creating distinctive mixes of international sounds, PUNCH EXCITERS gained global appeal and spread worldwide with tours in Latin America and concerts throughout Europe. Their success culminated in the smash hit DANCE OF THE FIRE, performed in festivals of more than 30.000 people in Russia as it climbed to first place on national dance radio. His weekly radio show, HOUSE KINGDOM, is produced in the MOLACACHO RECORDS studio and airs on various FM radio stations throughout Spain and Latin America. Notable broadcasters include LOCA FM in the Canary Islands, La MEGA RADIO in Valencia, URBANA FM in Uruguay and Buenos Aires, Argentina, and TOUR-BEAT, EXTASIS DIGITAL & 40 PRINCIPALES in Mexico and Texas. HOUSE KINGDOM is also available for download online, at www.revivelanoche.com among other music forums. More information about Willy Sanjuan can be found at www.facebook.com/willysanjuan and www.willysanjuan.com