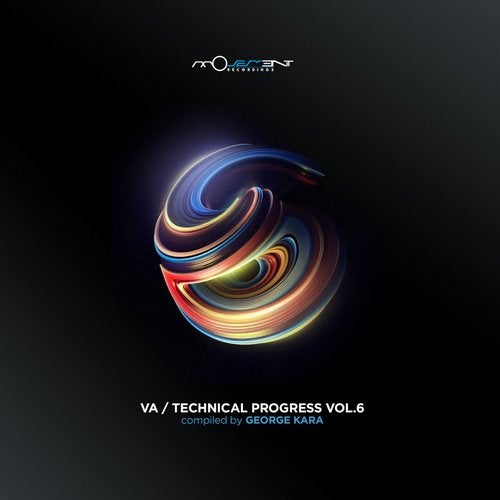 The latest release on Movement Recordings finds label boss Tash inviting veteran Greek DJ George Kara to compile the latest 'Technical Progress' collection. The long running series has been a showcase for fresh electronic music and at times provides a look ahead to future singles on the Greek imprint. Beginning in 2010, the 'Technical Progress' series now embarks on its sixth edition with George Kara curating the project. With over 20 years in electronic music George has hand-picked 11 brand new tracks from Paul Kardos, Just 9eorge, Eli Nissan, Me and He, 7even and George Kara, Tash, Stage Van H, Mariano Mellino and Maxi Degrassi, Roni Iron and Starwalk, Alejandro Manso and George Fil.

The release begins by welcoming Paul Kardos to the label with his latest studio creation 'Dragonfly'. The Hungarian artist gets the collection off to a great start with organic beats and grainy designs all set against a back drop of shimmering melody. It's mid tempo, laid back vibe is undeniably charming and sets the stage for latest from Movement label artist Just 9eorge. Quickly becoming renowned for his soulful, guitar laden productions the Greek native gives us something a bit different here, upping the tempo with bouncy grooves and a drummy, hypnotic cadence. The second artist debut on the collection finds Eli Nissan presenting his much anticipated 'White Shadow'. The Israeli producer has already found a home on Guy Mantzur's Plattenbank Records and his timeless take on house music continues to delight fans worldwide. 'White Shadow' proves to be another magical notch on Eli's discography with its charming melodies and live seaside vibe.

The collection's fourth offering welcomes Me and He to the label with 'Zeus'. Tasos Antoniou of the much loved 'Hi Profile' psy trance act and Greek artist Sotiris Vrettos make up the Me and He production team and look to focus on deeper material under this new moniker. The duo's debut offering 'Zeus' brings a funky groove with buzzing bass stabs and playful arps leading the charge. Smooth chord changes make for one of the most emotive tracks on the collection and ii's no doubt set for many magical moments as the warm festival season approaches. Next up we find the compilation's curator George Kara going deep with fellow Greek artist 7even. The duo's 'Mistry Forest' boasts a chugging foundation, tribal infused drums and an acidic underbelly which teases the senses throughout. No 'Technical Progress' compilation would be complete without a new offering from label boss Tash who presents his latest effort 'Springtide'. With gigs at all corners of the globe on a weekly basis Tash has a keen sense for the dance floor and it shines through on 'Springtide' once again. From its funky, spacious groove to a delicate melodic theme there's a lot to love here. A band of growling tones adds a modern flair before a serene break and stellar third act ultimately seals the tracks brilliance.

Next up long time Movement Recordings contributor Stage Van H returns to the label for his 23rd appearance. Famed for his productions with sometime studio partner Rogier, Stage presents his newest solo work entitled 'There Is Beauty In Simplicity'. Aptly titled, Stage works a timeless musical theme over a bed of warm, well textured grooves. A well timed break and quirky drop precede a heavenly finale making it one of the most heart warming pieces on the collection. The Argentinean duo of Mariano Mellino and Maxi Degrassi are next with their latest collaborative effort 'We Soon Again'. It's deep, pulsating groove is immediately inviting and plays wonderfully under a cross cultural vocal motif. Scattered claps add a great energy to the piece before a swirling, atmospheric break takes you further into dreamland. A mystical piece from Mariano and Maxi which sits as some of their most intriguing work to date.

As the collection reaches its final quarter Roni Iron and Starwalk step up with vocal gem 'Psycho Horns'. Anchored by a deep, rolling groove, gorgeous vocals soon adorn the framework as waves of percussion add some satisfying grit. A haze of effects trails through the piece initiating the main break, before a section of wonky horns steals the air and delivers one of the collection's most magical moments. Movement Recordings resident Alejandro Manso is next with 'Lucky Cat'. Known for his techno inspired creations the Mexican artist delivers a tripped out hypnotic gem. Again in a techno state of mind Alejandro works an offset lead with glimmering motifs and mesmerizing rhythms all backed by a wonderful low end growl. Closing the release out is George Fil who compiled the labels 'Modern Filosphy' collection in September of last year. The burgeoning Greek talent steps up with 'Slated Eyes', a dark, punchy affair with psychedelic design and glowing effects storyboard. It's a nod to the future from George which not only rounds the collection out nicely makes his forthcoming work all the more anticipated.

The 'Technical Progress' compilations have given electronic music fans much too happy about in recent years and George Kara carries on the tradition seamlessly with a well rounded collection of music here. Don't miss it.