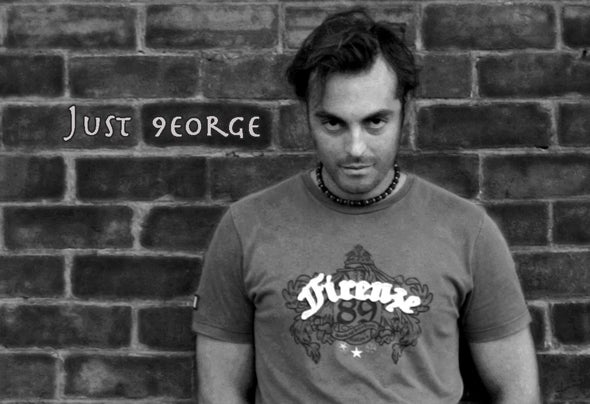 Just 9eorge is the solo project of George Exarchos. Born in 1980 and raised in Thessaloniki (Greece) George started as a guitar and bass player at the age of 16. He formed his first band with friendsand had his first live acts in festivals around Greece.In 1999 he formed his first electronic based project named Kumey. His first release "Homo Robato" via Z.M.A Recs / The Remedy followed in the same year.At the end of 2001 he formed multiple projects to explore the variety of electronic music. His main projects at this time were Relic for Chillout Drum&Bass, The Higher Human Form for Trance and Noiservices for polyrythmic Techno.Various tunes were released via Z.M.A and Erase Recs. like "Assymetric Duty Ratio" (Z.M.A/Connected Vol 1), "I Hear Them Call" (Z.M.A/ Battle Royal) and "Flyborg" (Erase Recs.).His debut album CD (Nevrohighways/Z.M.A) was highly appreciated all over the place and was featured in charts around the world.Following up this release e played many live sets at festivals and parties next to DJ's and bands like Atmos, Ticon, Human Blue, Cosmictone, Gabriel Le Mar, X-Dream, Delta, Charasmatrix and others.In the middle of 2005 he formed S.B.L (Salvation Becomes Light) and joined studio forces with other artists like Jimmy E, Nataly or Asun from different music scenes.His track "New Breath" released via Plus Rec. / Dance Sessions placed first in a national radio contest whilst "Sadness" was released via Unicorn Music.From 2007 to present he continuously works with Kostas Tikis as 9west. Together they've put more than 50 releases on the circuit which have been released via labelslike Dessous, Audiomatique, King Street Sounds, Nite Grooves, Liebe Detail, MGF, Crossfrontier Audio and Mature Music.George also works for living as an interior & furniture designer, a job that completes his passion for creativity. After so many years in music production and wood manufacture hebuilt his own studio and even his own music instruments like guitars, basses and drums in order to succeed his personal s ound.