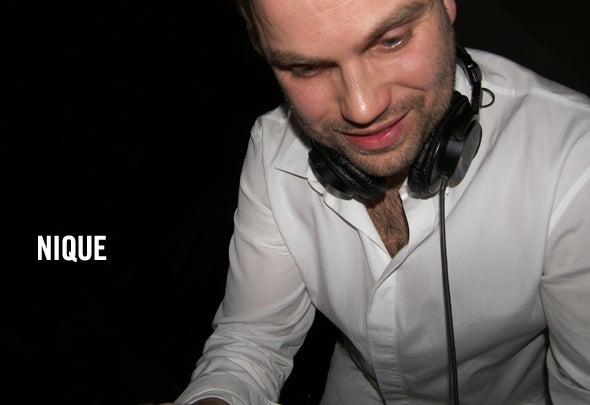 Nique “Music is my passion”, says Nique, who launched his DJ career in Colorado in the early 90s by pounding the dance floors with his infamous house sets. “Music allows me to express myself and connect with the rest of the world – whether it’s from my chair in my studio or behind the decks across the world.” During his stint in Colorado, Nique became a frequent name seen on flyers throughout the state and landed residencies with premier production companies and clubs. Since then, his career has taken all over the world, and in 1998, he found himself pulled back to his roots in Chicago, the city where house music was born. In the past 10 years, Nique has emerged as a leading DJ, producer, and remixer. As a long-term resident DJ at Chicago’s Big Wig, Spy Bar (Ninechannel Sessions), and with frequent appearances in leading clubs all over Chicago, Nique is a true house pioneer. His performances have caught the attention of music fans in the Midwest and abroad. His overseas appearances have included gigs at El Divino in Ibiza, Nature One Festival in Germany, Street Parade in Zurich, as well as in clubs in London, Mexico, Canada, Poland and many more. “I feel great reward and satisfaction knowing that people around the world can bug out to my tracks and DJ sets,” Nique says. “My music lets people take a break from everyday life and worries and allows them to enjoy themselves and have the time of their lives.” In the studio, he has worked on both solo and joint projects. His collaboration work with the Floorfillerz as the NSD Project, and his releases with long-time friend DJ Vitamin D have received top reviews by DJ’s and magazines worldwide and play on MTV (Real World and Road Rules). He has remixed tracks for dance hits such as Kid Crème “Doing My Own Thing”, Vitamin D Featuring Miss Audry “The Latin Track” and Chicken Lips “He Not In”. Currently Nique is working hard on more solo projects and remixes for labels from all over the world. In addition, Nique is the driving force behind Ninechannel Multimedia, Inc., home of Nine Records, Colorecordings, Bid Muzik, and Q Studios. Ninechannel provides the dance industry and its worldwide listeners with quality house music from local and international talent. With releases on labels such as Terraform, Moonshine Music, Special Needs, Hablando, Bunchlox, Deepha, Jump, Jackinthebox, IHR, and Colorecordings, just to name a few, Nique is ready for more and is sure to rock dance floors all over the world.