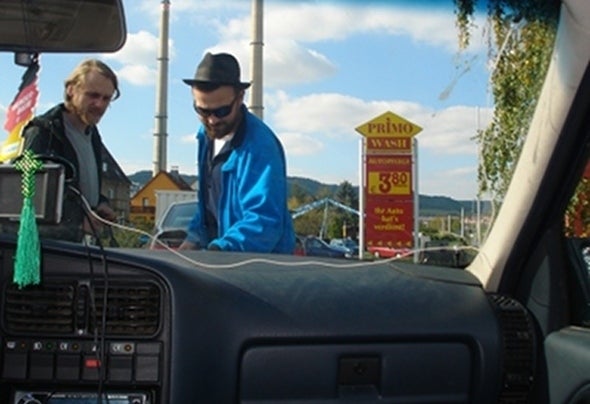 Who digs others a ”Krause”, is the Krause Duo! It is the story of two who must be heard. Carlson Basu and Metaboman both learned in the lap of Kassablanca, and got to know and love the delight of different club musicality. What the both possess: the emphatic Krause transmissions between the ears. When as a pair, than that’s it! Can’t move fast enough to get to the machines, MPC snatched up, back straight and learning from the greats and straight on produced (see Metaboman MK 001, etc.). The rest is vinyl history and the future, long in tradable dance format throughout with a completely unique antiseptic tone. A lively yet determinedly direct not easily decoded, but nonetheless furnishes a fully savored rocking (ahh, rockin!). So what do we have after innumerable tech-carousing nights, house riddled mornings, and jazz-riffs in the afternoon in the here and now? Funky dudes times two with a healthy ex and hop, brash in the way of Michael Caine’s “Cool is, not to pretend.” What began as an insider-diss now stands for a ‘la vida’ earnestness in the ballyhoo of dance music in which the official language is, this art mastered in just about every space on this place. Self-willed including a deep love and trust for the dance floor, this is high art without the art school. Whether from a production band or duo-lithic on the touched-tone there is always an outstanding music with the right balance and the required displacement of innovation and reliability. In the tradition of the Italian saying ‘Luck is with the brave’, the Krause Duo sometimes introduce the spoken word artist Flowin Immo into their sound garden. As well the addition together brings a diverse live music peak often to the releases and the occasional Metaboman Live. Krause Duo is a redeemer. A savior to a genre composed out of the niche-cosmos and great performance with the stuff and the right to. The magic of the moment remains long in the veins and doesn’t slide only slide in step, but remains a splinter in the mind. Krause Duo is a shared vibe in front of and behind the pulpit; sunning in the shine or chillin’ in the mud.