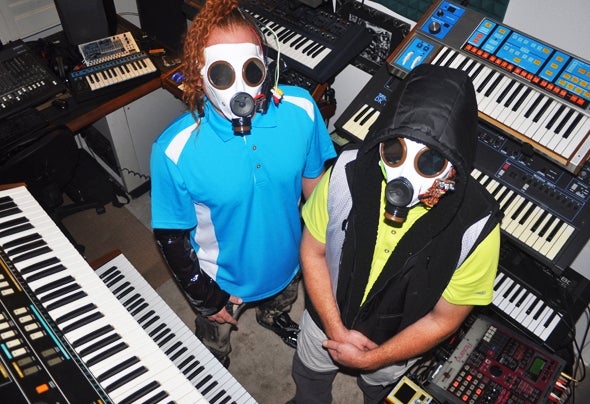 Brothers Demian and Miles began making music in their early teens as members of heavy metal bands in New York. After relocating to Arizona in the mid 90's they dove headlong into the underground industrial music scene, and began learning how to record and produce their own music. Their first demo received praise from local DJs which led to the establishment of Diencephalon Productions, the brothers' private home recording studio. Here they could create the music they loved, mainly electronic, without the time constraints of a traditional commercial studio. During this time they began recording and producing a variety of artists and genres; from Ambient to Electropunk to Rap/Hip-Hop, from DJs to Singer/Songwriters to Cover Bands, all the while honing their production skills and becoming completely self taught. In the early 2000's, a chance meeting at a day job, led to their company's first official contract, when Sony Digital Media released their sound library Toyz: Construction Kit, a collection of circuit-bent toy sounds the brothers had created. After continued recording and production of a variety of local AZ artists, they finally decided to begin work on their own project, and BeatCircuit was born. Since releasing their first single and self-produced video "Blast Radius" earlier this year, BeatCircuit is currently booking shows, working on their next single, and a full length album. After escaping from a secret government laboratory in New York, BeatCircuit began a perilous journey across the country, with plans to one day return and wreak havoc on the dark shadow government. For years they amassed an arsenal of sonic assault weapons, studied the ancient sonic art of circuit bending and began developing a roster of like-minded individuals bent on overthrowing the evil empire. Now, from deep in an underground bunker, somewhere in the Arizona desert, BeatCircuit unleashes it's sonic assault, battling the shadow governments secret agenda to plunder and dominate the world.