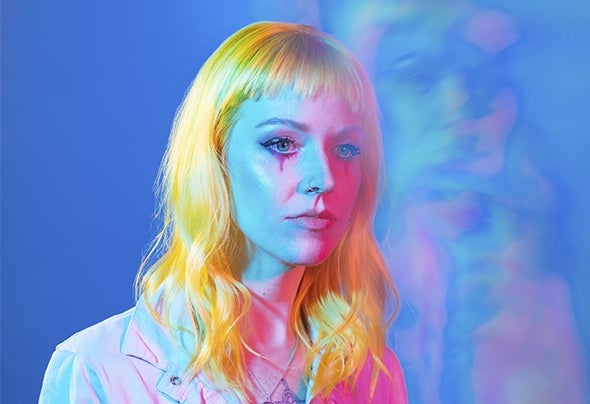 Öona Dahl, which derives from her spirit guides name, first discovered dance music in the 80s from her Mother who exposed her to music like Madonna and Donna Summer. As a child she found solace in nature and even enjoyed listening to tapes with sounds of the rainforest and waterfalls. She found a Bjork vinyl record at a garage sale which set her off into a lifetime passion for electronic music. Öona, not having many friends growing up besides imaginary ones, found comfort in coding and cracking software on her PC. She began using early DAWs like Fruity Loops and Acid Pro to make her own music. After seeing a DJ at a rave in Toronto in 2001 she went home and got herself a pair of belt drive turntables to start teaching herself how to DJ. Later, receiving lessons from DJ Pacman weekly near her home in New York, she went on to perform at clubs before she was even legally allowed to at age 17. In 2004 she moved down to Florida to be closer to Disney World and to attend college for sound design. During college she met DJ Three and Monk from Hallucination Recordings (Rabbit in the Moon) at an afterparty which led to her performing at annual Hallucination events. After moving to Berlin in 2014 she started releasing music on All Day I Dream and her debut album “Holograma” shortly after on Hallucienda. She has since continued to be a music producer, engineer, singer, graphic artist and music video director. Performing now around the world, as Öona Dahl and Slumber (with Amber Cox), she continues her path sharing higher conscious cosmic sounds.