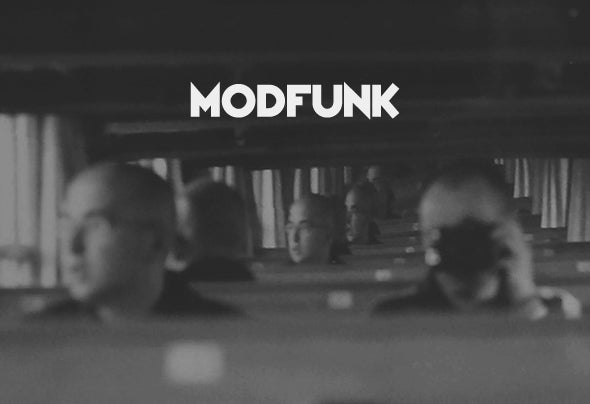 Polish duo playing electronic dance music that consists of Warsaw based producers Marcin Chmarzyński (Tigermaan) and Piotr Jarecki (PiMO). They have released three studio albums, and their productions are a combination of different styles - house, electro and disco. They have scored remixes for stars of the Polish and foreign music scene such as Monika Brodka, Reni Jusis and Demon - the legend of the club music scene, the author of the all time favorite "You Are My High" hit.T he group was founded in 1999. T he name Modfunk name comes from the Polish words "modny” (trendy) and "funk". The first hit was a recording of "Taxi Boy", following with "Superstar", which was placed in the music compilation "Pepsi Faza" (“Pepsi Phase”). The singles that came next were "Funk Salad", which was included in a compilation released by Machina magazine entitled "Niech Cię Usłyszą" (Let them hear you) and "Smile". It is worth noting that the participation in the Pepsi Faza project resulted in a performance at the Hungarian Sziget music festival, where Modfunk was warmly welcomed and played an hour long life- act.Their debut album "Superfuzja" was released in 2001. It was promoted by the single "Souler". You could have seen the characteristic music video with a blue and red character in a jumpsuit which was shown on MTV Poland and Viva Poland, as one of the first projects of the Polish club scene. It was also quite often heard on the Polish young adult radio channel called Radiostacja. Catchy rhythms and beats that have the famous "french touch" come to mind meant that the group was the trend that was talked about on the Polish house music scene, and the success of Modfunk made a contribution to its substantial development. It is also important that Modfunk took part in a project carried out by Wirtualna Polska called Strefa MP3 (The MP3 Zone), where you could download free Modfunk productions, which in those days was almost a pioneering venture.It didn’t take long to see the effects of first success. The duo had produced remixes for popular singers in Poland - Monika Brodka ("Miałeś być") and Reni Jusis ("Kiedyś cię znajdę"). At the same time, the artists worked with representatives of the Polish club music scene - among them were Envee, Nuno, Matt Kowalsky, Dr. No and Marysia Sadows ka.2013-10-21 12:09:08 modfunk.music@gmail.com ModfunkAnother release came out in 2003. The recording "Love &Artist Bio Hate", which features singer Evah, was again on the playlist of Radiostacja and Radio Bis (now Polish Radio 4). Remixed versions of the tune ended up on an EP for the London label Machine Gun Ibiza Records. Notably, it got very positive reviews in the renowned and prestigious DJ MAG UK magazine.Two years later, the Modfunk duo released the single "We Got Game". The music was promoted by a computer- animated video, which was nominated for an award of the Yach Film Festival. One of the remixes was created a by French DJ and producer Demon and this French-Polish cooperation resulted in a remix of Demon’s "Happy Therapy" created by Modfunk.The second album by Modfunk was released in 2008. The album "Emofunk" brought a change in style - melodic house beats were replaced by the more severe electro-pop and even rap, without eliminating the elements of disco. The work on this album included the cooperation of Philippe Zdar from Cassius – the Frenchman is featured in "Showtime". Additionally, the tune "Rack Bhayo Ni Ho Bro" has the guest vocals of John Webb of the American group Love Meets Lust.After the release of the album the duo invested their time mainly in solo projects. In 2009, however, they were invited to two Polish music festivals - Open'er in Gdynia, where they played on the Red Tent stage, and a few months later the Cracow Selector."Landgrab" is the title of the duo's third studio album. The album was released in 2012 and is a return to the lighter sound style - house and nu-disco.Although well-known artists do not appear here and most of the tunes are instrumental productions, this is the best album in their discography - full of pedigree dance sounds, warm and melodic vibes, not only for the dance floor.