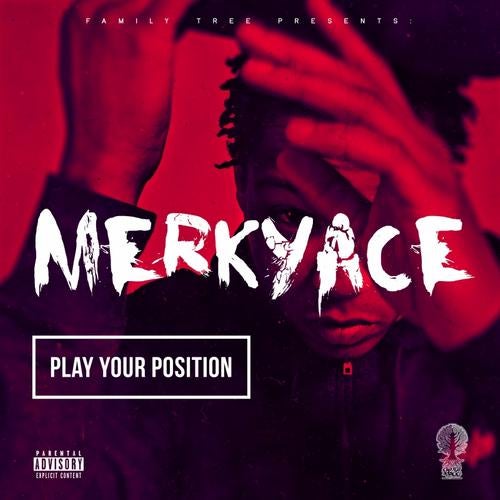 South East London's Merky ACE returns with 'Play Your Position', the second of his two-part mixtape, released on No Hats No Hoods this September. Since the release of the first mixtape 'All Or Nothing' Merky's appeared on an EP with Last Japan, featured on Boiler Room (again) and has taken to more stages across the UK and Europe. Merky's brought go-to producers (Faze Miyake, Rude Kid, Splurt Diablo and Deeco) as well as some new faces (Shift K3Y, Smurf Beatz, Jack Mason, Mr V, Jammin) to make a focused yet energetic set of tracks. The production team combine genres effortlessly, with the trap leanings of tracks like 'Strawberry Rain', 'Don't Know' and 'Naughty' merging with Merky's idiosyncratic flow and lyrical content to construct sinister urban soundscapes. There's a fair share of experimentation too, with the maddening 8-bit arpeggios of title track 'Play Your Position' building up over three minutes to create something frighteningly intense and warped vocals of 'My Lady' constructing an eerie, disjointed background for Merky to exhibit his flow. Recognised for his intelligent wordplay and catchy adlibs, Merky ACE has been MCing both by himself and with his collective Family Tree (other members include Ego, MIK, TKO and Shif Man, along with producers Splurt Diablo and Faze Miyake), for nearly 10 years. Over 12 releases later and he's garnered support from the likes of BBC 1Xtra and Radio 1'sTim Westwood, 1Xtra's DJ Cameo and Kiss FM's Logan Sama. His notable appearances on Logan Sama's After Hours alongside P Money, Blacks and Footsie have shown off his variety of flows while proving that he can consistently hold his own amongst some of grime's biggest names. Alongside radio appearances, he's honed his presence with PAs at Prague's The Roxy, Lovebox and Hip Hop Kemp festivals and Boiler Room while featuring on productions from heavyweights Starkey, Rude Kid, Preditah and more. To top it off, he's featured on Dizzee Rascal's recent 'Dirtee Stank TV 2' and Baauer's 'Day of the Dead' mixtape, helping to expand his ever-growing fanbase that stretches from the UK to the Czech Republic, Japan and Australia. "Ready to dominate 2013" DJ Cameo (BBC 1Xtra) "Gritty and honest but delivered as a real statement of intent" Clash "Gritty, raw and unmistakably aggressive" Hyponik