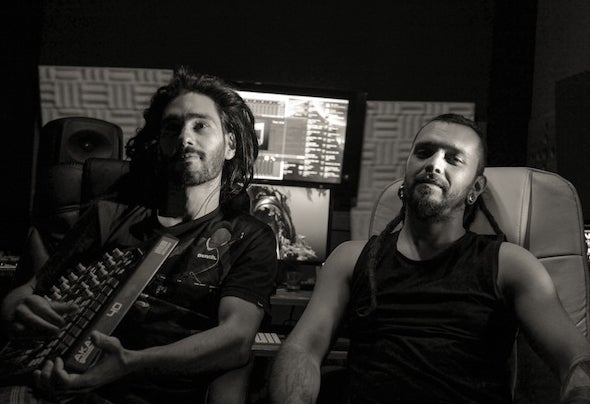 Ancient cultures have always had a close relationship with the other world. T hey believed in different gods which possessed unique forces to manipulate earth’s structure. But what if along the way some of their powers have migrated to humans? What if some people started to develop sacred magical forces that enabled them to morph sound waves into an enchanting melody that automatically captures whoever heard it? So far, such stories have been only rumours but some say they have encountered such beings, that these entities have managed to cross the border between sky and earth and leap into a third dimension of sonic time travel. Their name is believed to be Techyon, but you have to hear them to believe it yourself.Techyon was formulated in 2004 by Ivan Pereira (also known in his other aliases as Ahnk, Holophonik, Holographic Brain and Existence) and Pedro Stones (also known in his other aliases as Suspect Stones and Keysense), both have come from the sound engineering world and are hypnotised by ancient cultures. Their sonic journey began in an early age when they started to explore their artistic capacities in different positions in tribal,acoustic and metal bands. Their electronic dimension opened during 1995 when they started to try another artistic journey with mixing Techno which continued to a psychedelic trip during the millennium. Their inner drive to create something that will break the all patterns previously known to audible experience has pushed them to study music composition and sound engineering. This mutual passion for sonic challenges and a mosaic of influences such as Metal, Jazz, Funk and Tribal Rock have brought them together in 2004 and formed their hybrid creation – Techyon.In their bubbling laboratory they have created various pieces such as their debut album NG-101 (Free Spirit rec) during 2013, and released several EPs such as Quantic Systems (Free Spirit rec) and Time Pattern remixes (Ovimoon rec) and various compilations such as Goa 2011(Millenium records), Phosphenes vol. 6 (free-sprit records), Goa X vol 12 (Milenium records), Fractal Nature vol.1 (digital freedom records), Reawakening vol. 2 (Free-pirit rec). Techyon have scattered their spells all over the galaxy but particularly festivals such as Boom festival (Portugal), Antaris project festival (Germany), Universo Paralello (Brazil), AHO festival,(brazil), Freqs of Nature (Germany), Mayan Soul (Guatemala), Freedom festival(Portugal), Tribal Village (UK), Password is Love (France), and many more.