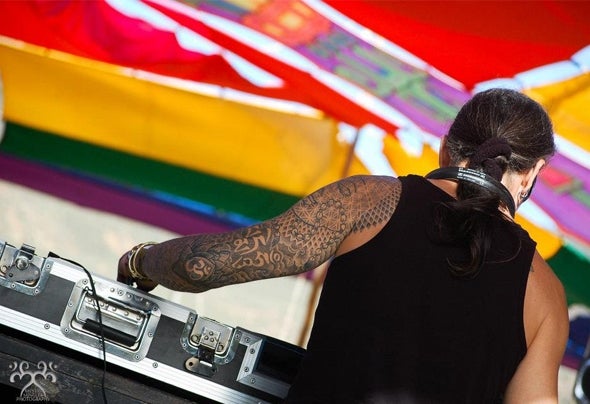 Omsphere (Jay OM / Journey / Sonic Wave Control / Crocodile Rangers / Star~Trip) is the progressive solo project of, Milan born but now London based, Giampiero ‘Jay’ Mastino, label manager of Free-Spirit Records. In 2004, Jay conceived the vision of a network of like-minded artists in the psy-trance, progressive and ambient genres, all working to promote themselves and each other under one banner. Thus the Free-Spirit label was born… originally intended to focus on artist management, the label’s skyrocketing success combined with the enthusiasm of Jay, the artists and fans enabled Free-Spirit to outgrow its horizons. Following several successful compilation releases, Jay released his debut solo Omsphere EP, Earthling, in November 2010 followed by a collaborative EP with Solar Spectrum, The Earthlings, in May 2011 and is currently working on a solo album. He has also released tracks on several other international labels and also has numerous releases under his other projects. Jay has been rocking the crowds at many of the biggest venues internationally as well as outdoor parties and festivals in the UK, Europe, Brazil and South Africa under his various projects including Boom Festival, Universo Paralello, Origin Festival, Fora do Tempo Festival, Aurora Festival, Vortex Festival, Boomerang Festival, Psionic Visions Festival, Sonica Festival, Samsara Festival, Life Celebration Festival and many more… Jay also produces psychedelic under the name Journey, he has a further psychedelic collaborative project with Ralph K (Braincell/Solar Spectrum/Rastaliens) called Crocodile Rangers and in January 2012 formed a progressive tribal trance project called Sonic Wave Control. Today, Jay’s reputation as an active, involved and hard-working individual in the global trance circuit precedes him. His commitment and enthusiasm for trance music has left an indelible impression on the world scene already and Jay’s future has never looked brighter, from his burgeoningly successful record label to his organized events to his upcoming solo releases. Jay works tirelessly at his art and trade and the music he brings to the masses exemplifies the fruits of his labour and energy. http://free-spiritrecords.com/artists/omsphere/