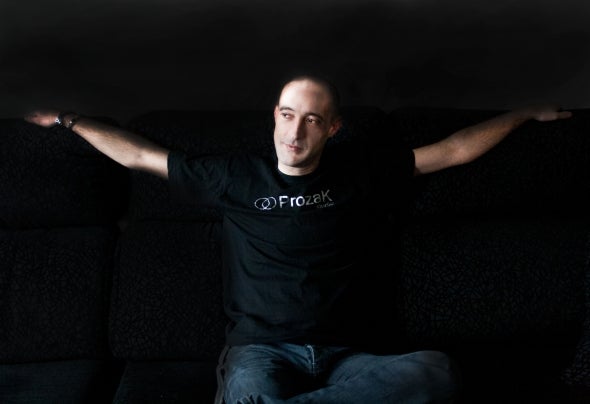 Birth of a DJ Fat Cat began his long musical career in 1991 at the age of 16 when he decided to buy his first Technics turntables, a mixer, and lots of vinyl; his first gigs as a professional DJ soon followed. In no time he made a name for himself in the local club scene and managed to become an integral part of what most now consider a golden age of electronic music nights in his city of Pamplona and across the north of Spain. He entered a privileged circuit of legendary clubs and lounges such as + & + (Pamplona) where he held an important residence for over 2 years, Reverendos (Pamplona) Pravda (Vitoria) The Sound (San Sebastian) Area 7 (Logroño) or Pacha (Zaragoza) He shared the stage with the likes of Ritchie Hawtin, John Acquaviva, Dave Clarke, Mark Broom, Chris Duckenfield, Steve Bug, Oscar Mulero, Angel Molina, and Sidereal, among many others. In 1997 Fat Cat shifted away from DJ residencies to managing his own club, Funny Baby, where he made it his mission to focus exclusively on a live music format, which at the time was a new (and still rare) concept for an electronic dance club. Funny Baby was the place for countless, amazing collaborations with live artists like John Acquaviva, Oscar Mulero, Wagon Cookin, Iñaki Kreator, Kike Pravda, and Karlos Phazer, giving fans a new dimension and vision of electronic music. These unforgettable nights became a mandatory stop for national as well as local artists and producers who would often come to play live sets after their DJ gigs spinning at other clubs around town.Today Fat Cat has taken time to focus on his own production work in the genres of House, Deep House, Techno, or Tech-House, releasing original tracks as well as white label remixes and mash-ups that have shaken up dance floors in Madrid, New York, San Francisco, Amsterdam and London. In addition to producing as Fat Cat, he has been hard at work developing more experimental and techno sounds using his alias, Pastemak. While we know little about the direction this latest project will take we're sure it will leave no one indifferent, particularly those who have already become fans of Fat Cat's work.