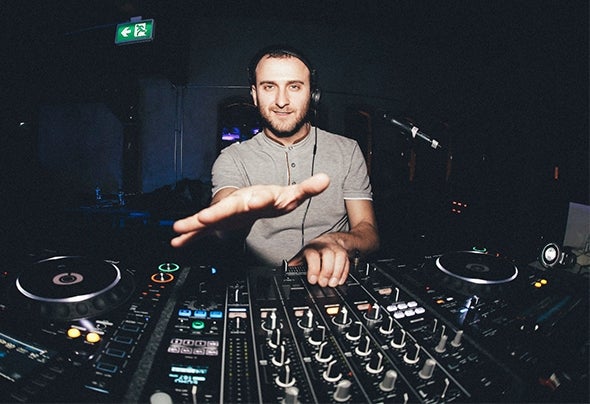 Erdinç Erdogdu has launched his music career as a DJ in 2003. He worked as a producer in Turkey’s very first Turkish-remixing radio station “Hitmix 105.8” and Turkey’s first dance web radio station “CT.DUO” where he broadcasted a series of shows by the name “Playlist”. He was the composer and arranger of the radio station’s corporate jingle. His debut of club performances was in Life Roof. He was the resident DJ in numerous venues, including foremost clubs in Istanbul’s nightlife, such as Chocolate, Versai, Vento and Fame Hillside Beach Club (Pacha). His first work as a producer was his remix for Petek Dincoz’s song “Doktora Git” in “Ne Yapayim Simdi Ben” album. The song, originally written and composed by Sezen Aksu, was complemented by a video. He arranged the song “10 Kere Demedim mi Sana” for the soundtrack of the film “Yedi Kocali Hurmuz”. He remixed “Kalp Bos” by Serdar Ortac for Nil Ozalp’s album “Acikolik” in collaboration with Kivanch K. He contributed to the arrangement of 7 records for Tugba Ozerk’s album “Ilan” and remixed “Seytanın Ortagi. The song entered DJ playlists in various countries, including the USA. He did the radio remix of “Unuttun mu Beni” for Sezen Aksu’s “Optum Remixes” project. His first solo work “Deseo” was released by Bavaria Records and entered top 10 lists in various radios abroad. The track was internationally acclaimed, having entered 8 different compilations and featured in digital music portals. He rearranged a Sezen Aksu classic “Hayir” for a club mix, for Esma Er’s album “No: 2” released in 2012. In 2011, he worked for the audio restructuring of the TV channel, Star TV, in collaboration with Kivanch K. He designed IDs and sound effects to be used throughout 2012. He covered the iconic New Age group Depeche Mode’s hit “Enjoy the Silence” for which Kivanch K contributed as vocals. The cover has entered top 30 in world renowned digital music store Beatport’s Top 100, and became #1 song in Traxsource. The song was also featured in Pacha Ibiza’s resident DJ Sebastian Gamboa’s “Las Tardes Ibiza 2014” compilation, as a part of a project by Defected Records. He founded his own label “We are Young Records” in 2014.