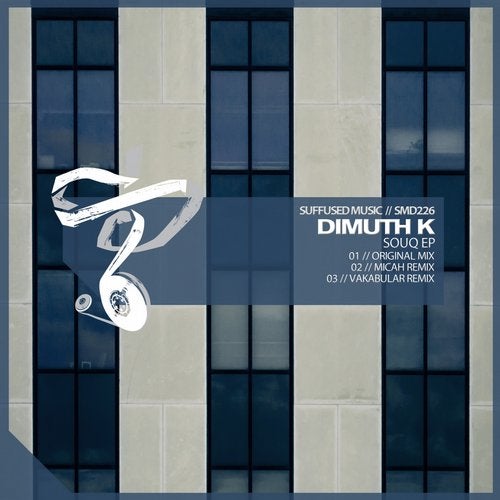 Originally appearing on Suffused Music's "Initializing Vol. 8" compilation in January 2016, Dimuth K and his "Souq" showcased the Sri Lankan's talent for dynamic bassline grooves and sparking melodic phrasing. Returning to the track, the original is reprised, along with a pair of brand-new remixes from Canada and Thailand.

An artist with a long and storied contribution to underground dance music, Micah Lukasewich has been involved in the scene for over 15 years. With a meticulous and intricately crafted approach to his music, Micah found success with remixes of Sissy's "I See You" for Global Underground and a remix of Bent's "As You Fall" licenced to Chris Fortier's "Balance" compilation on EQ Recordings. With a host of production credits up to 2010, massive support from the likes of John Digweed came from a reworking of Slacker's "Pyschout" while Micah's global DJ performance and "Ruhnsong" show on Proton Radio illustrated his ability behind the decks.

An association with a host of blue-chip imprints that include Lost Language, Baroque and Proton Music, saw Micah debuting on Suffused Music with a remix of Springa's "Syllables" in June 2016. He now returns with a typically masterful remix of "Souq". Built upon a dynamic rhythmic framework that incorporates a running percussive cadence, a host of new production material is created around Dimuth K's original work. Evolving elegantly, new melodic sequences come to the fore in the early stages before roaring into life in the third movement to sublime effect.

Thai artist, Vakabular has established quite a reputation for himself from his tropical paradise home of Ko Pha Ngan. Founder of the Hollystone podcast and record label of the same name, Vakabular is also a regular performer around the clubs of his hometown, affording him the opportunity to test his music on a wider club audience. With a century of production credits to his name, music signed to such leading imprints as BC2, Phraser Records and Stan Kolev and Matan Caspi's Outta Limits, Vakabular continues to find a place at the forefront of the techno and tech house sound that is key to his portfolio.

The February 2018 "Quarantine" EP marks Vakabular's debut outing on Suffused Music and it is a pleasure to welcome him back with a compelling rework of "Souq". With a framework rooted in huge four-to-the floor kick and offbeat hi-hats, the twinkling melodic phrasing and dynamic bass groove has its foundations in Dimuth K's original. A series of white-noise effects add further to the dramatic effect as Vakabular's remix builds effortlessly throughout, creating an impressive return to Suffused Music.