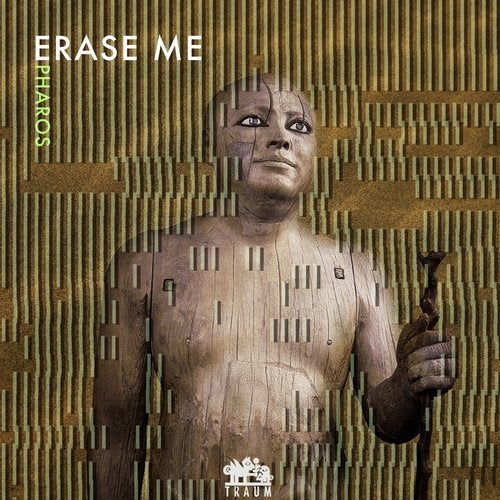 Erase Me is comprised out of two genius at work: Pavel Khvaleev and Frank Ellrich. Wold famous for their fantastic movies which sees them fly around the globe to film festivals. They're filming takes them to the most bizarre, desolate and exotic places for their shootings and music making seems to fit perfectly to it.
Their new EP kicks off with the technoid track "Universe" a dark and brooding nightmarish track steeped in dance music they are famous for. Underneath its gigantic surface something very pleasing and soothing takes place. "Universe" is a perfect partner in crime for a ride through the night and controls the space superb. A flow of energy somehow classic but nevertheless so essentially sensual it will navigate your expectations with grace.

"Pharos" is a heavy cerebral piece of techno revealing a great thought out arrangement and analogue fed complexity. The mystical approach is captivating and the break at half time brings back the best "Rave Days" of Belgian techno you can think of and offers a combination which proves irresistible.

Erase Me are famous for they're equally thrilling electronica featuring mesmerizing droning melodies with that introspective, melancholic soul we like. So "Maya" attempts to walk on these grounds which you can also see illustrated with an amazing outlandish sci-fi video featuring twisted animated hairlike structures on volcanic soil directed by Pavel Khvaleev.

Olga Wojciechowska is a Polish composer and multi-instrumentalist whose work drifts between modern classical, experimental and electronic music. She was noticed by Ninja Tune, The Wire and 1631 Recordings on which she has released. In the techno and electronic world she became well known also for her rework of Nathan Fakes "Radio Spiritworld".Her interpretation of "Maya" blends piano and orchestral melodies creating something magical and divine you don`t want to miss.

Koelle has been releasing with us on Tour De Traum and has proven to be a gifted musician. He has turned "Maya" upside down and into a massive club anthem!

Recently joining the rooster of Traum artists, Ikaro Grati added his introspective and psychedelic sound to "Maya" and we hope you like it as much as we do.

The last original on the release is "Limbo" and it is claustrophobic and alien as can be. Watch the video and see the non-gravity rotating body.

Remixes of "Limbo" come from Riamiwo, Hassan Abou Alam and De Kraken all artist that have shown their class with releases on Tour De Traum.
Riamiwo has written his remix with an uptempo & high rhythmic feel whereas Egyptian artists Hassan Abou Alam has written a unique energetic downtempo mix .
The remix from Dutch artist De Kraken heavily makes use of a mad rotating sequence that are joined by a mob of sequences and so gains the quality of a centrifugal running havoc.