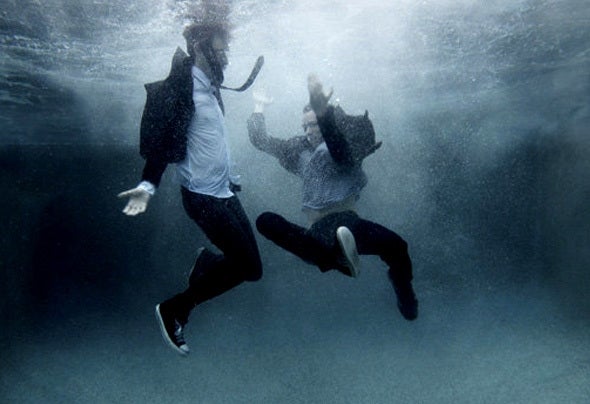 “Bask in their intoxicating tunes, which range in personality from somber and minimalist to hopeful and sublime" - Paper Magazine"beautiful" - Filter Magazine"Home Video has created a journey...that never ceases to bounce back" - Under The Radar Magazine"the album showcases the duo's widening sound palette and effortless blending of both darkness and light." - Nylon Magazine"wholly uncompromising in its approach and aesthetic" - Big Shot Magazine"layered intensity and ethereal vocals, at times making strides into territory charted by the likes of Radiohead and Massive Attack without losing their own identity along the way."- KCRW"Artist to Watch" - Rolling Stone"Moody, provocative songs...superb album" - Flavorpill"Blending the charming guitar stylings of Pulp and the like, Home Video's minimal electro Brit-pop is infectious, to say the least. At times reminiscent of really poppy new wave, No Certain Night Or Morning is destined to stick in our heads for some time to come." - XLR8R“Home Video start off with the kind of bassline Snap! would've turned down on grounds of if it being too infectious before snaking sophisticatedly into 'Blue Monday'-era New Order.”- NME"Plaintive fragile vocals and guitars wrap their way around pulsing electro that recalls M/A/R/R/S, early Electribe 101 and the icy atmospherics of Boards of Canada from this shady NY duo. It is beautiful, haunting and - Music Week "[Home Video's] got the ability to be at the forefront of where electronic music is steadily venturing: rock hybrids." - BPMHome Video are Collin Ruffino and David Gross, transplants from the misunderstood landscape of New Orleans, now living in the brooding brownstones of Brooklyn, New York. Here they revel in a self-created world of references to Edward Gorey, Massive Attack, The Brothers Quay, Smashing Pumpkins, and a dusting of Chopin, references that they have been collecting for nearly ten years.They connected in high school art class in 1997. Under the instruction of an eccentric painter, who claimed to have been raised in a Louisiana chateau where servants peeled grapes for him to eat, they spent hours drawing still lives of twisted vegetables and rendering the chiaroscuro of adolescent self portraits. Outside of art class, they made a short narrative video starring David, and directed by Collin, a collaborative set up that continues still and perhaps an influence for their band name.At the time Collin wore all black, listened to Nine Inch Nails and Smashing Pumpkins, and was in a band called The Great and Secret Show. David, a classical pianist in training and the son of two classical musicians, had been sheltered from the Top 40, or anything composed after 1900. It wasn't until Collin played him a cassette tape of The Great and Secret Show that David realized pop music had the potential to be as emotionally impacting as classical. Collin continued pulling him into the 20th century, introducing him to albums like Mezzanine, Dummy, and OK Computer. David started playing keyboards for the band.College scattered the members of the Great and Secret Show, David in Boston studying music and philosophy, Collin in New York studying film, but they remained in touch and created music together during summer breaks. Once the distraction of higher education was out of the way, they reconvened with New York as home and soon discovered a new sound as their latest incarnation, Home Video. The first Home Video song came to them in the dead of winter, the blizzard of 2003. As the piling snow erased the landscape outside his window, David huddled over the warm vibrations of an analog synthesizer creating the simple loop that first inspired their minimalist sound. The fear and anxiety of New York's atmosphere at the time had eaten its way onto the pages of Collin's tattered notebooks and became their confessional style of lyrics. Underlined by a thumping, bass-rich beat, the pairing of the two worked well and the song evolved into "Melon," the first Home Video song created and the closing track on the album. Inspired by their new philosophy, other songs quickly followed and the band sent out demos.Originally discovered by Warp Records, the label released Home Video's first two EPs in 2004, both packaged in sleeves illustrated by Collin's dark, Gorey- esque drawings. "That You Might", a 10" single, immediately picked up considerable attention in Britain from BBC Radio 1 and the NME, while the five song Citizen EP earned the band a feature in Rolling Stone. In 2006, US-based Defend Music released their debut full length, No Certain Night Or Morning. Grammy- nominated DJ Sasha picked two of the songs from this album to remix for his most recent release, Involver 2, which also included songs from Thom Yorke, Ladytron, M83, and Apparat. Home Video themselves have recently taken to the role of remixer, reworking songs for bands like Bear in Heaven, Wave Machines, Faunts, Bang Gang, and friends Naked Hearts.As electronic-rock producers and performers, they record everything themselves, then adapt it live into a full on rock show with live drums and hypnotic visual projections. After sharing a bill in London at the start of Home Video's first European tour, Blonde Redhead were so impressed that they invited the band to support them for three weeks of shows in North America. Since then they have opened for such diverse acts as Justice, Yeasayer, Flying Lotus, Pinback, DJ Krush, Colder, and Radio 4. Taking advantage of Ruffino’s film education, the band has also made several of their own music videos. The band’s video for “I Can Make You Feel It” premiered on MTV2’s Subterranean, and had over 200,000 views after being featured for a week on the front page of YouTube.com.With their new album, The Automatic Process, the band layers samples, synthesizers, piano, guitar, and live drums to build an electro-tinted minimalist rock that drives steadily towards the sublime -- a spacious soundtrack evocative of a fractured dream.