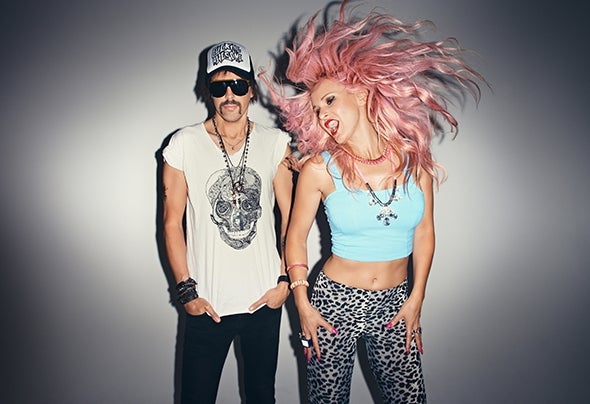 Vandalism are one of Australia’s biggest EDM artists & have been enjoying success as one the most sought-after electro artists in the world. With the increasing demand for their distinctive live show, they have been touring across the globe with their ‘in-yer-face’ performances, featuring Andy Van tearing up the decks and vocalist Cassie Van with her head-turning live performances. They have completed dozens of international tours, which included gigs at the world’s leading Clubs & festivals in USA, London, Canada, Ibiza, Greece, Brazil, Zurich, Sweden, Moscow, Ireland, Korea, Bali, Indonesia & New Zealand. They’ve performed alongside some of the world’s leading DJs & acts, including David Guetta, Steve Angello, Sebastian Ingrosso, Eric Morillo, Steve Aoki, Prodigy, MSTRKRFT, Boys Noize and many more. To date Vandalism have released a barrage of top-shelf singles, including She Got It (with Angger Dimas), Insane, YES (with Ftampa), Vegas (with Static Revenger), Rockin, Throw Your Hands Up, Smash Disco, Never Say Never, Hablando, & Bucci Bag. And they are also responsible for some of the biggest remixes in Clubland over the decade, including Creeps , Rise Up, Heater, Toca’s Miracle, Blue Monday, Get Shaky, Hey Hey, Right In The Night, I Believe, He Not In, Back Once Again & Automatic Machine, most them achieving #1 positions on Beatport, Djdownload.com & other DJ download sites (see Bio at bottom for more info) The first sounds of Vandalism originally began in 2004 when Andy Van & Kam Denny hooked up to bootleg & mashup electro & house choons. From there they started remixing, the first was their massive Remix of “Creeps” by The Freaks becoming one of the biggest downloaded tracks in Uk Dance history. Cassie joined the group as the lead vocalist and lyricist in 2005. (Kam Denny departed the group in 2009). Vandalism have enjoyed an amazing rise, to become one of Australia’s leading Electro/Dance Outfits.