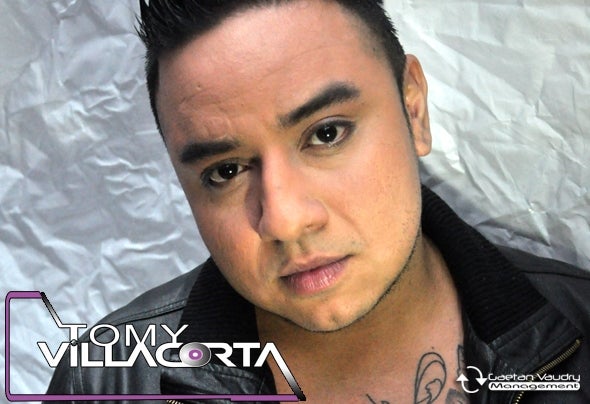 A man of principals, Tomy Villacorta knows how to please a crowed and take them into his musical univers its an electrifying experience that will make you want to dance all night long.Rare are the artist as talented as Tomy (born in Salvador mixed with Arab origins form his Dad's side) Tomy will celebrate his 29th bday next august. He arrived in Québec at the age of 16, the oldest child from a family of 5 kids, they were all passionate of music. Its at the age of 8 that he discovered his artistic side before becoming a DJ, Tomy was a drummer and singer. He first show was in El salvador in 1990, at the Cuscatalan stadium, in front of 15 000 peoples.Always wanting to improve Tomy turned to his new passion house music in 2007 creating new sounds and flavours that a lot of people and djs appreciate. DJ/ producer and remixer Tomy started working with the DJ/producer Mario Estrada then with the Dominican Pabloa Herrera from Graveyard Entrertainment and Graveyard Rekordz.He then met the very talented and owner of Vortek Records Ulrich Van Bell and that made a difference in his musical carrier. This opportunity gave Tomy the chance to create his first single (In the Mind of Chuntao) that has great success in Québec.After this hit Tomy came up with multiple remixes : Millennium from DJ Uppercut & MIchel Simard (The Control Storm Remix), Refund (Sam Rockwell, The jungle Dub Remix), Waiting (DJ Dfrench, Out Of Original Mix), Together (Alex Torn, Tomy Villacorta Remix), and his latest one Too Hot To Touch (Bruno Kauffmann, Infected Voice Remix).But Tomy also has his original work: Symptoms and In The Mind Of Chuntao (2009), he does a collaboration with Derick Prez for the tracks As the World Turn (Divine Element & Over The Moon) in the beginning 2010, and Bubble Gum (2011). After hearing his production Activate & Go which is very successful, we are all awaiting for his new Track My Digital Expression that should be released summer 2012