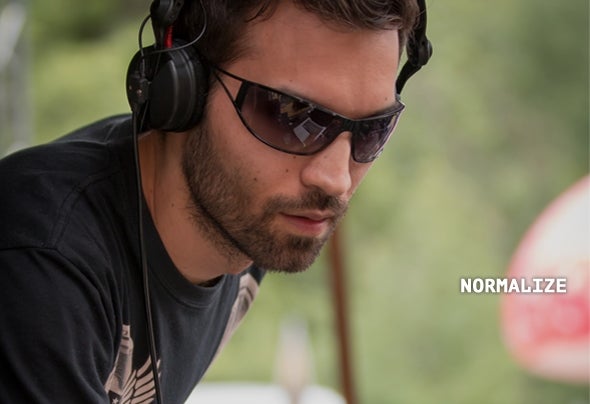 Flashback: There were these two cheap harmoniums, an electric guitar and a small home amplifier.And then this 13- year old boy who performed daring manoeuvres to combine all this stuff. While one of the keyboards played back some demo loops, he was jamming on his guitar and used his bare feet to create some simple bass sequences on the other keyboard...Lots of things have changed since then, but when watching Tasos from Greece now known as Normalize, performing a live set of his project, one can still see that eager for action boy and his unbroken euphoria for creating sounds. During his Music & Technology studies he figured out that there were exciting ways to replace his feet- at least for music production purposes.The sound engineering education taught him a lot about the possibilities of software and hardware but he mainly learned proper listening and mixing. Combined with his undoubtedly vast enthusiasm for creating music, it was only a question of time for the audience to enjoy the first tracks he mixed.And of course they turned out to be thriving hits.Being a part of the Progressive House duo “Pointech”, his tracks found their way into the cases of DJs like Tiesto, Paul Van Dyk or Armin Van Buuren. But Tasos did not stop at this point; he moved further by deciding to focus on his deep passion for Trance music.And so Normalize was finally born. The project distinguished itself by a remarkable high level of sound quality from the very first hours and therefore it directly entered the upper league. Tasos keeps the clubby moments for his housey project- under the moniker Normalize he presents original, highly energetic and uplifting melodic Progressive Trance.