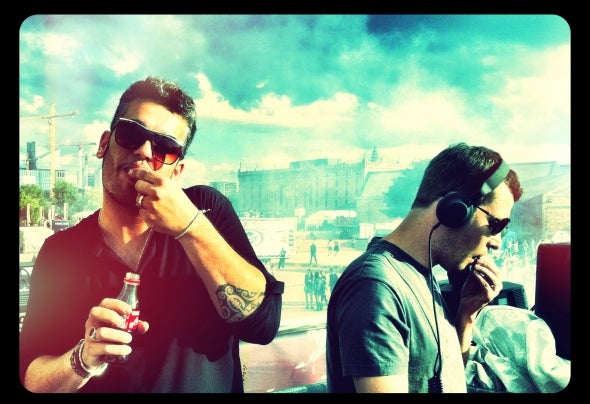 With records on Visionquest, Hot Creations and Guy Gerber's Supplement Facts, Ultrasone is one of Belgium's fastest rising house duos. The group is made up of Vernon Bara and Igor Vicente. Both met years ago in their hometown of Mons, but until recently took different paths. Bara got his feet wet as a producer, releasing dozens of tracks and DJing in clubs around Europe. Vicente, while notching up international gigs as well, became a player in Belgium's club scene, DJing at top tier venues like Fuse and Silo, and eventually founding one of Ghent's finest parties: Wildfamily at Decadence. The series became one of Belgium's main outposts for underground house and techno––their first guest was Jamie Jones, just after his debut EP dropped on Freak n' Chic, and since then they've hosted dozens of equally essential artists, including the likes of Seth Troxler and Guy Gerber.After years of leading parallel lives, Bara and Vicente realized their shared love of modern club sounds and started working together, officially forming Ultrasone in 2011. It's safe to say they started strong: their first track, "Don't Feel No Way," came out on Visionquest’s Club Collection (Spring Summer 2011) in June, and was included on Seth Troxler’s In the Lab mix, Maya Jane Cole’s Feel the Future mix for DJ Mag, and Space Ibiza’s official closing fiesta compilation. A few months later, Troxler passed along one of their songs to Jamie Jones, who released it on Hot Creations. The EP was called Breathe N Pop, and right away it shot up the Beatport tech house charts––the B-side, “Spiral Reserve,” hit #18, and the title track made it all the way to #1, no small feat for a duo less than a year old.Meanwhile, Guy Gerber had wanted to release Ultrasone's music ever since Vicente showed him a demo at Kazantip. They gave him Here and So Far, an EP with three of their most mature productions yet. Driving, melodic and almost dreamlike at times, the record shows Ultrasone’s subtle artistic touch as well as their club sensibility, confirming them as one of the most promising new duos out there today.Will Lynch